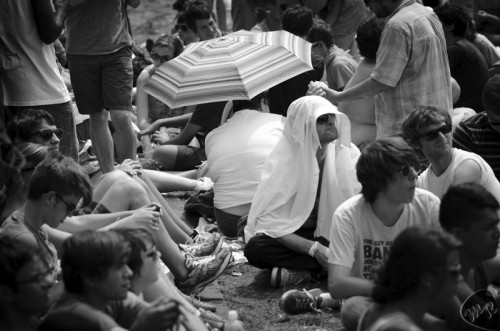 * While Cut Copy’s take on early ’80s UK dance pop didn’t appeal to me personally, I still admired the way in which they drew in the crowd.  When Cut Cupy said, “1, 2, 3, dance,” thousands and thousands danced in response.  Plus, despite their clean-cut, med-school student, looks those four lads actually gave a performance.  This is not one of those dance bands who simply stand on stage and twaddle with dials.  They’re engaging, sincere (Almost to the point of cheesy), and energetic.  No one else could get all of the shade people out of the shade before nightfall.  Credit and respect, Cut Copy.

* Usually, when wandering the festival grounds I like to keep my eyes open for the most clever t-shirts or the most outrageously dressed.  I don’t have a favorite outfit from Sunday.  I was too distracted by all the skin.  As you’ll hear over and over, it was brutal, instant sweat-back hot on Sunday.  As a result there were lots of people, men and women, stripping down to the barest they could be while staying decent.  Not too come off sexist, thinnist, fattist, chestist, or misogynistic, but some of them looked pretty decent.  That’s all.

* Pitchfork cares. Really, they do. On a day when the heat could have sent many to the hospital they slashed the price of water to $1 and handed out cases of water to the fans lined in front of all three stages.

* The cold towel I had on my head for most of the day may have looked stupid, but it was one of the best ideas I’ve ever had. I wouldn’t have covered as much ground on Sunday without that cold towel. I probably wouldn’t have gotten as many strange looks, either.

* I had meant to mention this earlier, but the official Pitchfork app was developed by the Cleveland companies, Squnch and Little Jacket Design. You can check out their main app, Diacarta, here.

* Since Pitchfork studiously rates albums on a zero to ten scale with decimal points, and music writers love making lists these days, I feel obligated to share my top five acts from the festival weekend. Here they are: