Warning: "continue" targeting switch is equivalent to "break". Did you mean to use "continue 2"? in /nfs/c06/h01/mnt/88637/domains/blog.irockcleveland.com/html/wp-includes/pomo/plural-forms.php on line 210
 I Rock Cleveland I Rock Cleveland | The Rockometer: Let it Beard by Boston Spaceships

The Rockometer: Let it Beard by Boston Spaceships 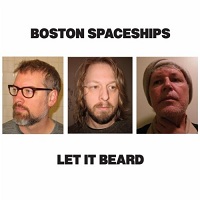 On the heels of a successful reunion tour by Robert Pollard’s first, and far more popular band, Guided by Voices, and with persistent rumors that the classic lineup of that band (Those largely responsible for albums like Propeller, Bee Thousand, Alien Lanes, and Under the Bushes, Under the Stars) will release an album of new material, it’s been easy to overlook what Pollard has accomplished with John Moen and Chris Slusarenko in Boston Spaceships. Don’t. For the past three and-a-half years and four albums, this new band has been the source of Pollard’s best post-GBV work. And now, with the double album, Let it Beard, he has equaled, and in some ways, surpassed those high standards set in the early-to-mid ’90s.

Like the material released during GBV’s peak performance, Let it Beard also has a rock collage feel to it — There’s a palpable spontaneity in the mix and the songs don’t naturally flow from one to the other in a traditional album sense; Styles shift unexpectedly, keeping the listener on their toes, even after multiple spins; And, melodies arise from the unlikeliest of places, but pop nonetheless.

“You Just Can’t Tell,” a grimy, glam-rock fist-pumper, nestles itself next to the pleasantly, strummed left-coast folk of “Chevy Marigold.” The arena-rock of “Earmarked for Collision,” leads to the one-minute, in-and-out punk rocker, “Toppings Take the Cake,” which in turn paves the way for the pure, power-pop satisfaction of “Tabby and Lucy.” The post-punk and krautrock influences of “German Field of Shadows,” bring some strange into the mix, but it leads to the mid-tempo, bar-rock of “Speed Bumps.”

Yet, for all the overt lack of planning Let it Beard may display, no song and no sound seems unwelcome or out of place. Not the squeakiest squeal and not the kickingest riff. This is a testament to the attention Pollard, Moen, and Slusarenko put into both the album’s recording and its sequencing.

Another thing those beloved GBV records didn’t have, is the big rock sound of Let it Beard. This is not a lo-fi record. The guitar tracks laid down by Slusarenko and guest shredders J Mascis (Dinosaur, Jr.) Mick Collins (The Dirtbombs), Dave Rick, Steven Wynn, Collin Newman, and one Mitch Mitchell (GBV) are thick, boisterous and teeming with intensity. Moen’s drumming, meanwhile, is nimble, inventive, forceful and always spot-on.

The one minute-stomper, “Juggernaut vs Monolith” has the type of bruising, low-end throttle a song like Guided by Voices’ “Poastal Blowfish” would only reveal on stage. While songs like “I Took on The London Guys,” “The Vicelords,” and “Let it Beard,” pile on the riffage with leads that would make The Who’s Pete Townsend proud.

Ultimately, it’s that mix of Guided by Voices’ quaintness and quirkiness with Boston Spaceships ability to flat-out rock-out, that makes Let it Beard such a successful album. It will mess with your anticipation, wander into oddities, confound and then floor you with that pure, Rock ‘N’ Roll sound. It will remind those who have seen Guided by Voices perform 20, 30, or 40 times why they jumped aboard the good ship, Pollard over 15 years ago, and prove to the youngsters they’re not crazy. It will go down in history next to Propeller, Bee Thousand, Alien Lanes, and Under the Bushes, Under the Stars, as one of the defining works of Robert Pollard. And maybe, just maybe, it will finally get Boston Spaceships the respect they are due. Let it Beard deserves all that, and more. 11 out of 10 on The Rockometer.