Warning: "continue" targeting switch is equivalent to "break". Did you mean to use "continue 2"? in /nfs/c06/h01/mnt/88637/domains/blog.irockcleveland.com/html/wp-includes/pomo/plural-forms.php on line 210
 I Rock Cleveland I Rock Cleveland | The Rockometer: Our Blood by Richard Buckner

The Rockometer: Our Blood by Richard Buckner 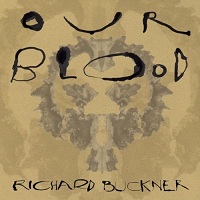 Working with a quiet confidence, a naturally smooth and deep voice (one like Evan Dando’s, but with a lot less crack damage), and deceptively attentive arrangements brimming with details for the patient ear, it’s no wonder Richard Buckner has never risen to a larger profile.  His brand of downtrodden folk all sounds too easy on an album like Our Blood.  Do you hear that fractured static peeking through the guitar and pedal steel of “Traitor?”  Well, someone had to have left a loose connection in the studio.  That’s the buzz.  How does one explain the way guitar, organ, and that pulsing loop all come together so perfectly on “Thief?”  That can’t be chance, right?  Buckner’s nonchalance would imply everything just fell into place.  Similarly, the patience and beauty of “Ponder,” with its open arrangement of guitar, organ, and strings is both brilliant in its simplicity, and maddening in how Bruckner makes it seem so effortless.  Maybe if he strained a little more and allowed weakness to penetrate his unwavering sense of strength; Maybe if those powerful feelings of remorse expressed in songs like “Escape” and “Confession” caused a crack in his voice; Maybe, then, more would notice.  Then, again, it wouldn’t be a Richard Buckner album, an album of subtle wonder, but one also devoid of the highs and lows needed to penetrate the constant, twittering chatter of our modern world. 7 out of 10 on The Rockometer.