Warning: "continue" targeting switch is equivalent to "break". Did you mean to use "continue 2"? in /nfs/c06/h01/mnt/88637/domains/blog.irockcleveland.com/html/wp-includes/pomo/plural-forms.php on line 210
 I Rock Cleveland I Rock Cleveland | The Rockometer: Rock ‘N’ Roll Dreamer by Mickey 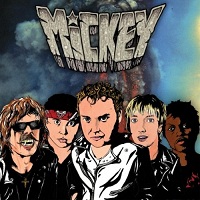 Take one part Rock ‘N’ Roll High School, one part Thin Lizzy, one part Cheap Trick and one part T.Rex. Mix in a shot of the youthful exuberance of The Exploding Hearts. Add a dash, now just a dash, of cheese-metal guitar riffs. We don’t want too much cheese metal. And we’re close to all the ground the Chicago band Mickey covers in their debut album, Rock ‘N’ Roll Dreamer, an album of teenage party-rock that stubbornly refuses to conform to three chords, three kegs, and three days with the parents away. Songs like, “Dance,” and “My Lady” take the sexy swagger of a Marc Bolan boogie and inject it with the speed and enthusiasm of punk rock. While numbers like “She’s So Crazy” and “For You” are their inverse — Starting with a framework of The Ramones and filling in the details with glam’s big guitar lines and seductive shimmy. As long as Mickey keep things relatively simple Rock ‘N’ Roll Dreamer is thoroughly entertaining. It’s when they try to cram too many of their Rock ‘N’ Roll heroes into too tight of a space that they begin trip themselves up. “Kids Crazy in Love” suffers an identity crisis when a perfectly fine take on the trash-rock of the New York Dolls gets interrupted with power guitars, a disjointed chorus, and pounding instrumental passages from who knows where that fit neither the verse nor the chorus. “For You,” has a similar penchant for quick changes and could use similar streamlining. While “Scream With Me” never quite makes up its mind between pop-metal, proto-punk, or proto-metal. Once Mickey learn the fine art of keeping all those influences in check, there’s no doubt they’ll be the stylish, Rock ‘N’ Roll animals of their album cover.  Until that time, we’re left with a record that knows it wants to rock, but doesn’t always know when, where, or how.  6 out of 10 on The Rockometer.