Warning: "continue" targeting switch is equivalent to "break". Did you mean to use "continue 2"? in /nfs/c06/h01/mnt/88637/domains/blog.irockcleveland.com/html/wp-includes/pomo/plural-forms.php on line 210
 I Rock Cleveland I Rock Cleveland | Daytrotter Brings Their Barnstormer Tour to The Cuyahoga Valley National Park on August 31st 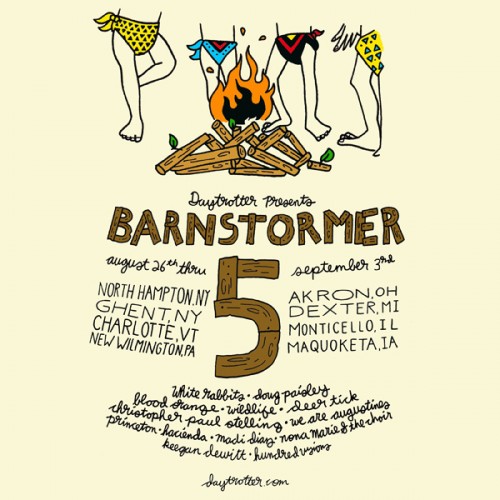 On August 31st, the folks behind the new music website, Daytrotter, will be bringing a different type of concert experience to Northeast, Ohio. The Barnstomer tour will feature White Rabbits, Doug Paisley, Wildlife, Princeton, Hacienda all performing in an honest to goodness barn, The Conrad Botzum Farmstead Barn, in the Cuyahoga Valley National Park. Of special note to the locals is the band Hacienda, who as you may remember, backed up The Black Keys’ Dan Auerbach on his 2009 solo album. So while you may not be familiar with all of the acts playing, you will be in for some high quality rock, folk, and roots music in an unfamiliar setting.

Tickets for this special event can be purchased at the Daytrotter website, and due to the nature of this show, pre-orders are very much appreciated. Now, if you want to know what you’re getting yourself into, besides a barn with bands, Daytrotter is also the place to go. They have archived performances by many of these acts, recorded at their Iowa studios, free for streaming and download.

Pre-Order tickets for the Daytrotter Barnstormer Tour at the Conrad Botzum Homestead Barn.