Warning: "continue" targeting switch is equivalent to "break". Did you mean to use "continue 2"? in /nfs/c06/h01/mnt/88637/domains/blog.irockcleveland.com/html/wp-includes/pomo/plural-forms.php on line 210
 I Rock Cleveland I Rock Cleveland | The Rockometer: Mirror Traffic by Stephen Malkmus and The Jicks

The Rockometer: Mirror Traffic by Stephen Malkmus and The Jicks 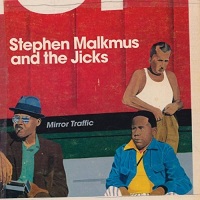 When one considers Stephen Malkmus, once of the much-beloved indie rock group, Pavement, spent much of 2010 on a very successful reunion tour with his former band, it’s not totally surprising that this album with The Jicks would sound like a long lost collection of Pavement tracks recorded circa 2002.  What is surprising is that two of the ’90s biggest alt-rock icons (Malkmus and Beck, who produced Mirror Traffic), could work together in the studio and only come up with an album that sounds like a collection of long lost Pavement tracks circa 2002.  This is true after hearing what Beck was able to accomplish in the studio with Sonic Youth’s Thurston Moore on Demolished Thoughts, an album released earlier this year where he steered the revered noise-maker through a set of subdued and meticulously arranged ballads, recalling his own Sea Change, to wonderful effect.  And, it’s even more true when one takes into account Beck’s own recording career, which, if not always forward-thinking, is consistently challenging and bending our notions of genre.

To be fair, Mirror Traffic isn’t a bad sounding album.  The songs have that Pavement sound where the underpinnings are a bit rickety, and Malkmus sings, ok, drawls, like he hasn’t a care in the world.  Plus, the songs feel spontaneous, belying the effort behind them.  Malkmus audibly cracks up during the first verse of “Stick Figures in Love,”  and lead single, “Senator,” is stupid fun in the mold of “Cut Your Hair.”  “Brain Gallop,” meanwhile, breaks the Pavement mold with some very tasty, ’70s rock-radio style guitar which peaks at the end of the track, and “Forever 28,” has a slick, shuffling rhythm about it before it trades that cool for a big mass of garbling guitar buzz, the likes of which Pavement often spun so well.  And, yes, there’s that word again: Pavement.  The problem with Mirror Traffic is not the songs but their perception.   Beck and Malkmus could have, no, should have done more to make Mirror Traffic more than a nostalgic romp.  For if the goal was a Pavement album in 2011, why bother with Beck as the producer and why not bring the old band in the studio, too?   6 out of 10 on The Rockometer.

VIDEO: Stephen Malkmus and The Jicks – No One Is (As I Are Be)