Warning: "continue" targeting switch is equivalent to "break". Did you mean to use "continue 2"? in /nfs/c06/h01/mnt/88637/domains/blog.irockcleveland.com/html/wp-includes/pomo/plural-forms.php on line 210
 I Rock Cleveland I Rock Cleveland | The Rockometer: Endless Now by Male Bonding 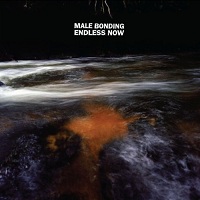 Now that Male Bonding have ditched that lo-fi style of their first album, we can finally see what this young band of English punks are capable of on this, their sophomore album, Endless Now.  Granted, at the time of their debut, the shit-shine was the new pro-tools, and lo-fi the new hi-fi, but their blend of American pop-punk and UK shoegaze was done absolutely no favors with that shit-shine, no matter how in it was.  When their songs should have popped they were garbled and shapeless.  When their songs shot for a big, feel good melody, they got dirty, flat, and bland.

Consequently, Endless Now can be thought of as a do-over, or a re-introduction, or the real debut, and since every debut deserves a good lead-in, here it is:  There’s a palpable American/English duality throughout much of the album.  The vocals of guitarist, John Arthur Webb and bassist, Kevin Hendrick, are sung in the style of late ’80s/early ’90s Brit-pop and shoegaze.  Tones and phrases are elongated and maintain a light haziness about them.  The guitars are layered, often with one track fuzzed and another sharpened.  The rhythm section meanwhile, is crisp and pops in the tradition of ’90s power pop and pop-punk.  As a result, songs like “Tame the Sun,” “Bones,” and “Dig You,” are both familiar sounding, yet easily identifiable as being the work of one Male Bonding.  Extra touches like handclaps and cleaner harmonies only serve to accentuate the infectiousness of this set.  And let’s not understate that last point: Endless Now is laden with the type of hooks you’ll want to experience time and time again.  8 out of 10 on The Rockometer.