Warning: "continue" targeting switch is equivalent to "break". Did you mean to use "continue 2"? in /nfs/c06/h01/mnt/88637/domains/blog.irockcleveland.com/html/wp-includes/pomo/plural-forms.php on line 210
 I Rock Cleveland I Rock Cleveland | The Rockometer: Lenses Alien by Cymbals Eat Guitars 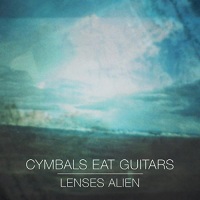 One thing Cymbals Eat Guitars does not lack on their second album, Lenses Alien, is ambition. This East Coast act has more ambition than your average indie-rock outfit times ten.  Hell, “Rifle Eyesight (Proper Name),” the opening track on this, their second album, runs over eight minutes and recalls Built to Spill, and of all things, Janes Addiction’s Ritual de lo Habitual.  It’s the type of track most would build to.  Not Cymbals Eat Guitars, they use its grand movements, bursts of static, and ratcheting guitar melodies as a gatekeeper.  If you can make it though this, then you’re cool for the rest of the album, too.

The risk of starting an album in such a startling fashion, however, is that everything else will sound like a let down.  This is especially true today, as labels don’t have bathtubs of money, champagne, cocaine and hookers to throw your way to facilitate and sustain all of your grand plans.  Not that Cymbals Eat Guitars are into those types of things, or needed those types of things, but one thing they could have really used when recording Lenses Alien was a big money producer.  There’s a lot of guitar geekery here; A lot of major label ambition done a small indie’s budget; Key changes and tempo changes, false endings and abrupt endings; And, the net effect of the band’s inability to sustain one thought for any meaningful amount of time is that the listener is never able to reach any comfort with these recordings.  One verse chorus verse would have gone a long way in properly framing the band’s ambition.  As such Lenses Alien comes off as the work of an undeniably talented, yet unfocussed, band.   6 out of 10 on The Rockometer.