Warning: "continue" targeting switch is equivalent to "break". Did you mean to use "continue 2"? in /nfs/c06/h01/mnt/88637/domains/blog.irockcleveland.com/html/wp-includes/pomo/plural-forms.php on line 210
 I Rock Cleveland I Rock Cleveland | The Rockometer: Father, Son, and Holy Ghost by Girls

The Rockometer: Father, Son, and Holy Ghost by Girls 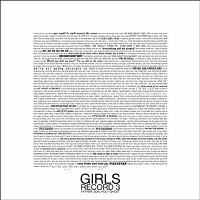 On Girls’ Father, Son, and Holy Ghost, the San Francisco band’s second release for True Panther/Matador Records, there’s “Vomit,” the song, which, truth be told, is an absolute stunner — A thrilling six minute ride, epic in the way Pink Floyd or Guns ‘N’ Roses could be epic, with the dirtiest, and I mean unwashed, unkempt, sleeping on the streets of 1990’s Seattle, raised on a diet of dumpster scraps, Mudhoney, Sonic Youth, and Nirvana dirty, guitar solo.

Then, there’s vomit the act, which is the urge I had to hold back throughout much of the balance of this album.

To some extent, the shortcomings of Father, Son, and Holy Ghost are a matter of taste. The guitar solo on “Die,” the album’s heavy number, is wholly unimaginative, like Heavy Metal for Beginners, and the guitars on “My Ma,” are cheap, Clapton knock-offs (And we’re not talking Clapton with Cream, but Clapton solo). Others may not spot the classic rock cliches, and they may find these passages provide a much needed change in tone and volume. Fair enough.

Still, there’s no excusing the amount of overwrought, sentimentality that dominates the second half of the record. Even those who don’t have an environmental gag reflex to the smooth sounds of ’70s soft rock may be taken aback. “Just a Song,” sets the tone with its mantra, “Love, love, love, love/It’s just a song,” repeated against a backdrop of light, wandering flute and heart-tugging strings. Then, songs like “Forgiveness” and “Love Like a River,” pile on and on and on and on in excruciatingly sappy detail to the point where the record gets cheesy, and schmaltzy, and it starts to make ’70s soft-rock cast-offs,  Captain and Tennile, seem exciting, lively and groundbreaking by comparison.  The Captain and Tennile were none of those things.  Click that link and see.

Hey, maybe you never sat in a dentist’s waiting room in the ’90s where all they played were the soothing sounds of WDOK.  That’s me.  Maybe, I’m being too mean when I compare the second side of the record to The Captain and Tennile and vomit.  That’s me.  Maybe, my expectations were whacked when someone for a certain taste-making, web-magazine wrote of this record during their 9.3 review, “This is one of the best-sounding rock records in years.” Again, place the blame on me.  However, if you’re reading a review and the reviewer has to come up with excuse after excuse as to why an album isn’t as bad as it seems, one has to pause, one has to think, “Maybe, there’s something to that Captain and Tennile and vomit thing.”  That’s me, warning you.  4 out of 10 on The Rockometer.