Warning: "continue" targeting switch is equivalent to "break". Did you mean to use "continue 2"? in /nfs/c06/h01/mnt/88637/domains/blog.irockcleveland.com/html/wp-includes/pomo/plural-forms.php on line 210
 I Rock Cleveland I Rock Cleveland | The Rockometer: S/T by Wild Flag

The Rockometer: S/T by Wild Flag 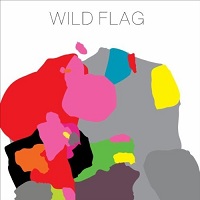 Indie Rock, that catch-all genre for all things underground, has had to fend off numerous criticisms over the past few years — Inide rock too white!  It’s too nostalgic!  It’s too safe!  It’s too smart for its own good!  What is indie rock anyway?!?  One criticism no one ever lobs, however, is that indie rock is too much fun.

The reason is simple and can be seen with one’s own eyes at indie rock festivals across the country.  Many of these new acts are proper and polite and take much care in their performance.  Some are quite talented, too.  Rarely, however, do any of these new indie rock bands (And here we’re defining indie as any rock-based band who regularly gets headline treatment on Pitchfork) play with any passion.  Passion doesn’t necessarily mean forty-five minutes of pogo, stage dives, and guitar smashing.  Really, anything more than standing, staring, strumming, and singing would be a start.  C’mon guys.  One step to the left and now one to the right.  Now we’re dancing.  Now we’re having fun!

In this era of safe, white, nostalgic, intellectual indie rock Wild Flag stand out for being, more than anything else, fun.  The songs on their self-titled debut are more than songs — They are calls to action.  They are invitations for the listener to join the band — Carrie Brownstein (ex-Sleater-Kinney) on guitars and vocals, Mary Timony (ex-Helium) on guitars and vocals, Janet Weiss (ex-Sleater-Kinney) on drums, and Rebecca Cole (ex-The Minders) on keyboards — and share in those same passionate and enthusiastic feelings for Rock ‘N’ Roll.

The vitality and energy of lead track,”Romance,” is hard to ignore.  Weiss’ drumming is sharp, on the spot.  While Brownstein and Timony alternate crisp, choppy bits of guitar with more robust, classic rock sounds.  Then the chorus comes around, evoking the feel-good sounds of the Go Go’s, and the love-in between the band, their music, and you, the listener is all but settled.

Even as energetic, exciting, and infectious are all apt adjectives to describe Wild Flag, the album never feels dumbed-down in its pursuits.  Brownstein and Timony rarely skip an opportunity to show off their guitar goddess prowess (Between songs like “Short Version” and “Electric Band” no fret goes untouched).  Yet, they’ve both been around long enough to know how to strike the right balance between space and action.  They’ll trade riffs, or inject their own personality as they each work the same melody, or slink in and out of the mix.  Weiss has such a command of her kit, however, that the songs still follow a natural pattern. Handclaps, tight harmonies, and spontaneous screams point the way, and there’s always a hook to come back to.  That hook is usually a big one, too, as on “Endless Talk,” where the band plays The Cars to “Romance’s” Go Go’s.  Even “Future Crimes,” with its patient chord progressions and pointed, post-punk guitar melodies is deceptively catchy.

With a band so thoroughly enjoying themselves (The LP’s inner sleeve with Brownstein leaping in the air with her guitar is proof positive) and so much talent, this is an act who can only get better.  Rough spots, like the uneven “Glass Tambourine,” and the not always convincing, bar-room blues of “Race Horse,” will be smoothed out, and the hook’s will get even sharper as Brownstein and Timony continue to develop their relationship as dual leads.  And that’s saying a lot for a band who’s just dropped a debut so hot.  9 out of 10 on The Rockometer.