Warning: "continue" targeting switch is equivalent to "break". Did you mean to use "continue 2"? in /nfs/c06/h01/mnt/88637/domains/blog.irockcleveland.com/html/wp-includes/pomo/plural-forms.php on line 210
 I Rock Cleveland I Rock Cleveland | The Rockometer: Nasty, Brutish, and Short by Pujol

The Rockometer: Nasty, Brutish, and Short by Pujol 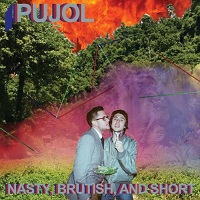 Nasty, brutish, and short, indeed. At seven tracks and less then 20 minutes, Pujol’s debut EP for Saddle Creek Records, is a rough-edged mix of garage and punk served with a side of Southern swagger that is both instantly likable and full of promise.  Lead vocalist, and band namesake, Daniel Pujol of Nashville, has a scruffy and scraggly delivery immediately comparable to a young Westerberg, Eric Bachmann during his Archers of Loaf days, or  even Eddie Spaghetti of the Supersuckers.  He just exudes Rock ‘N’ Roll danger and the songs themselves just call for the sound of shattering bottles in the background.  And about those jams, while garage punk is the short version of the story, Pujol and company are not afraid to veer off script and inject a blazing, ’70s Southern Rock lead (“Battles”) or serve up some British Invasion styled pop (“Point of View.”)  When you consider Pujol’s home town is quickly emerging as the next big scene in rock, it’s not a stretch to say they may be the one of the bands to break.  Jack White has firmly established his base in the South with Third Man Records (Who, by the way, released an earlier 7″ by Pujol).  The Black Keys have made a home there, too.  But if we’re talking new bands, Pujol’s Nasty, Brutish, and Short has to stand next to Jeff the Brotherhood’s We Are the Champions as a prime example of the new Nashville sound, a decade spanning sampling of rock less concerned with who or when or is this cool as it is with how.  That is with attitude.  7 out of 10 on The Rockometer.