Warning: "continue" targeting switch is equivalent to "break". Did you mean to use "continue 2"? in /nfs/c06/h01/mnt/88637/domains/blog.irockcleveland.com/html/wp-includes/pomo/plural-forms.php on line 210
 I Rock Cleveland I Rock Cleveland | “Fuck This Year” by Herzog

“Fuck This Year” by Herzog 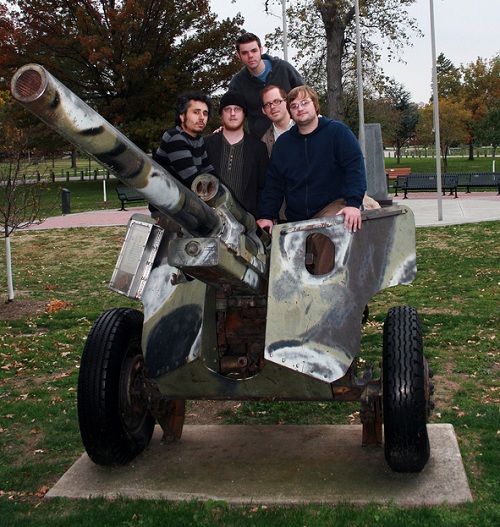 Seeking to prove they’re more than another band of ’90s revivalists raised on slacker rock, Cleveland’s Herzog have prepped a sophomore album that’s bigger, brawnier, and brainier than their well-received 2009 debut, Search.  Part of the genesis can be traced to the fact that more than ever, Herzog are a band and not just a vehicle for songwriter Tony Vorrell and lead singer/guitarist Nick Tolar.  The rhythm section of Brian Hill and Dan Price, who also add heft to local, stoner-rock act, Megachurch, give songs like “Fuck This Year,” a much fuller sound while not sacrificing the pop hooks which made the band’s early work so immediate.  And while there was always a sense of civil consciousness in the words of Tolar and Vorrell (Recall, this is a band who frequently cover The Mice’s “Not Proud of the USA” in concert), “Fuck This Year,” comes across as especially pointed.  It’s no secret that our nation’s economy isn’t exactly clicking for everyone and pop critics are still wondering why more musicians haven’t taken notice.  Herzog knows the score.  They’re aware of the plight of the unemployed, under-employed and over-interviewed, and they’ve seen those big corporate profits, too.  Their reaction isn’t to give up, but resilience and air guitar.  Seriously, never has a track about economic uncertainty inspired as much air guitar as “Fuck This Year.”  Tolar and second guitarist, Dave McHenry, have outdone themselves.

Look for Herzog’s second album, Cartoon Violence, to drop early 2012 on Exit Stencil Records.  In the meantime, there’s that jam above, and a show November 23rd at The Happy Dog to check out, too.