Warning: "continue" targeting switch is equivalent to "break". Did you mean to use "continue 2"? in /nfs/c06/h01/mnt/88637/domains/blog.irockcleveland.com/html/wp-includes/pomo/plural-forms.php on line 210
 I Rock Cleveland I Rock Cleveland | The Rockometer: Carrion Crawler/The Dream by Thee Oh Sees 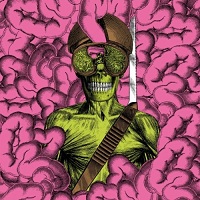 Not the wandering, goofy goodness of Castlemania, 2011’s first LP by the San Francisco garage-rockers, Thee Oh Sees, Carrior Crawler/The Dream is a more concise, more direct, and significantly heavier affair. Part of this can be traced back to the album’s genesis. Originally conceived as two separate EPs, principal John Dwyer, and the rest of the band, ended up cranking out an album’s worth of material in one week of studio time. Just as important was Dwyer’s desire to make this record more representative of their live shows. So while the offbeat and exaggerated vocals of Dwyer and Brigid Dawson still earn quick comparisons to the B-52s, the music which surrounds them suggests something entirely different, namely early proto-punk from Detroit and Seattle. “Carrion Crawler” and “Crushed Grass” both hint at what Iggy and the Stooges would have sounded like had they had a sense of humor — Driving, intense, but not so serious that they wouldn’t beep and blurt a bit of nonsense along the way. “Chem-Farmer,” meanwhile sees the band heading north and west for inspiration with a bass line that go-go grooves and guitars snapping back with measured attacks. Later, “The Dream,” answers the previously unasked question, “What if Austin Powers got his hands on something like Black Sabbath’s ‘Paranoid?'” It would be surprisingly danceable. Surprising, that’s a fine way to describe Carrion Crawler/The Dream. If you’re familiar with Thee Oh Sees previous work you may have a hard time imagining how any of these songs could work — Those vocals, that whimsy, paired with traditionally heavier strains of rock, just can’t. Yet, after a couple spins it does, and does so well.  8 out of 10 on The Rockometer.