Warning: "continue" targeting switch is equivalent to "break". Did you mean to use "continue 2"? in /nfs/c06/h01/mnt/88637/domains/blog.irockcleveland.com/html/wp-includes/pomo/plural-forms.php on line 210
 I Rock Cleveland I Rock Cleveland | The Rockometer: Cartoon Violence by Herzog

The Rockometer: Cartoon Violence by Herzog 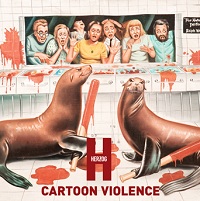 Cleveland’s Herzog are a talented band of another type.  In their case, talent means understanding.  They have a firm grasp of Rock ‘N’ Roll from the ’60s through to modern times, from surf pop to power pop, from slacker rock to shredding rock;  They understand the value of the traditional verse-chorus-verse song structure;  And, they understand that filling two sides of vinyl with your talent is not the same as making a record people will want to spin time and again.

On Cartoon Violence, Herzog’s second album for Exit Stencil Records,  this talent manifests itself in tracks like “Fuck This Year” and “Rock ‘N’ Roll Monster,” a one-two punch of crunchy power pop in the vein of early Weezer, the likes of which Weezer frontman Rivers Cuomo himself hasn’t been able to duplicate in 15 years of trying.  “You Clean Up Nice,” takes a similar approach with an over-sized guitar sound and clean vocal lines, but instead of whipping up a furious ending, it eases back and slowly reveals vintage harmonies in the style of The Beach Boys’ Pet Sounds.

Later, the diversity of songwriters Nick Tolar and Tony Vorrell comes into focus with the West Coast, country rock of “Dreaming Man II.”  Here, Tolar’s carefree, easy delivery is backed by the solemn sound of pedal steel, wandering guitar melodies and a steady shuffle of a beat.  Meanwhile the diversity of the assembled band (Tolar on guitar/vocals, Brian Hill on bass, Dan Price on drums and Dave McHenry on guitar), shines on “Alexander the Great,” the album’s closing number where Hill and Price, who double as the rhythm section for Cleveland stoner-rock band, Megachurch, provide the thrust behind the shred fest.

Impressively, as Herzog skip between genres, work in different textures, and vary tempos, they never lose that sense of band — Shredding Herzog and laid back Herzog both sound natural. For these Clevelanders, talent also means never laying down a bad jam. 9 out of 10 on the Rockometer.