Warning: "continue" targeting switch is equivalent to "break". Did you mean to use "continue 2"? in /nfs/c06/h01/mnt/88637/domains/blog.irockcleveland.com/html/wp-includes/pomo/plural-forms.php on line 210
 I Rock Cleveland I Rock Cleveland | The Rockometer: The Horror by Pop.1280

The Rockometer: The Horror by Pop.1280 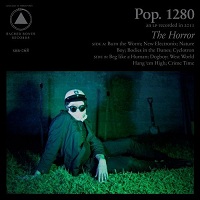 The Horror is dirty, no filthy, no filthy as fuck. The Horror is a brutal, bulldozing, skronky, scuzzy, and screechy, dystopian cyber-punk rock record steeped in the tradition of The Jesus Lizard, SST Records, and John Carpenter soundtracks where “Two dogs fucking” is both the opening line and perhaps the most comforting line on its two sides.

And yet, for all the choice adjectives and all the ace references, something is missing from Pop.1280’s first full length for Sacred Bones Records, something keeping The Horror from being that brutal, skronk rock masterpiece of its own tortured dreams. That something is a song. Even the Jesus Lizard, that nasty, corrosive beast of a band from Chicago, the band against whom all scuzz monsters must measure, would break up the nasty with a two or three minute, blissfully, cathartic jam (See “Nub” on the album Goat, for example). The Horror, meanwhile, becomes numbing after a while. There’s only so many bruises a body can take and Pop.1280 delivers more than a fair share of bruises over songs like “Burn the Worm,”, “Bodies in the Dunes,” and “Beg Like a Human.”

Closing number, “Crime Time,” should be that song, the triumph where all of the elements, all of those adjectives come together — The spooky, sci-fi synths, the rhythmic, dance-rock beat, gnarled guitars, and an actual melody with a shouted punk rock chorus, but instead of claiming its place on the A-list of the American noise-rock scene, it feels more like a relief.

Something else The Jesus Lizard keenly employed in their arsenal was negative space, relying on the rhythm section and David Yow’s pipes to do the dirty work when the obvious ploys got old. Once Pop.1280 learns that beatings and melodies aren’t mutually exclusive, they will be that next great skronk rock band. As the old saying goes: You can pummel some of your listeners some of the time, but you can’t pummel all of your listeners all of the time because you’ll have no one left to buy your records and merch and then you’ll have no choice but to take that soul-crushing, cubicle job your Aunt Judy tells you about at every family gathering. 7 out of 10 on The Rockometer.