Warning: "continue" targeting switch is equivalent to "break". Did you mean to use "continue 2"? in /nfs/c06/h01/mnt/88637/domains/blog.irockcleveland.com/html/wp-includes/pomo/plural-forms.php on line 210
 I Rock Cleveland I Rock Cleveland | The Rockometer: Angels of Darkness Demons of Light II by Earth

The Rockometer: Angels of Darkness Demons of Light II by Earth 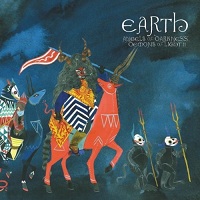 Crafted from the same sessions as 2011’s Angels of Darkness Demons of Light I, and split into its own album, Earth’s Angels of Darkness Demons of Light II is heavy in tone and tempo, but not in volume as it takes a solemn, reverential and unique approach to American roots music.  For just as metal no longer seems an apt way to describe the output of Dylan Carlson (guitar), Adrienne Davis (drums and percussion), Lori Goldston (cello), and Karl Blau (bass), neither do folk, rock, or country.

At times it’s as if Earth have crafted their own branch of American music, steeped in the same traditions as familiar forms like rock and country, but distinct from both.  “His Teeth Did Brightly Shine,” for example, is a folk jam unlike any other.  It lulls the listener in the low end and features little, if any percussion as Goldston and Blau caress Carlson’s slow, sinewy guitar melodies.  In the process, it unearths an alternate spirituality, one separate from the Christian traditions of gospel and bluegrass.

While “Waltz (A Multiplicity of Doors),”  could be classified as a dance by virtue of having a 3/4 time signature.  However, Earth’s version is creaky, creeping and mournful, with a beat like an unsteady rocking char and Goldston’s cello sounding withered, decrepit and distorted.   Its pace is not one of joyfulness and freedom, of celebrating life and music, but of someone staring eternity in the eyes as they take their last, staggering steps.

Blues music also gets the Earth treatment on “The Corascene Dog” and “The Rakehell.”  The former features Carlson, Blau, and Goldston trading the same basic melody in the style of a showcase jam, slyly adding complexity as its eight minutes gradually unfold.  While on the latter, Carlson steals the show, as he patiently picks his chords, then meticulously layers one guitar track atop another; Some become complementary melodies; Some are nothing more than quick jazzy flares; And others, more elongated, meld seamlessly with Goldston’s cello and provide extra texture in the form of feedback.  During its twelve minutes, larger truths begin to emerge as themes of permanence, peace and majesty can be visualized in the quiet mind.

Yes, enlightenment can still be found in the oldest of forms, but with Earth, more so than any other band, one must be open and one must be dedicated.  One must be free of cell phones, laptops, and tablets blinking, beeping, and singing look at me.  One must basically detach his or herself from the modern world as we know it.  Patience may still be a virtue, but it’s one often lacking in 21st Century life and art, and when one comes across such an expression, as on both parts I and II of Angels of Darkness Demons of Light, it can be as jarring as any bass boy’s obnoxious, screechy, and synthetic beep.  9 out of 10 on The Rockometer.