Warning: "continue" targeting switch is equivalent to "break". Did you mean to use "continue 2"? in /nfs/c06/h01/mnt/88637/domains/blog.irockcleveland.com/html/wp-includes/pomo/plural-forms.php on line 210
 I Rock Cleveland I Rock Cleveland | The Rockometer: Arrow by Heartless Bastards

The Rockometer: Arrow by Heartless Bastards 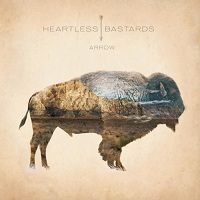 Not to be outdone by that other throwback rock band birthed in the Buckeye State, Erika Wennerstrom and the Heartless Bastards have put together the kind of cohesive, all-purpose rock album in Arrows  that’s rarely heard these days.  Whether they’re playing back room blues, a honky-tonk shuffle, or a boogie inspired by Marc Bolan and T Rex, Wennerstrom’s voice and her bandmates accompaniments are up to the task.

And what a voice it is.  Possessing a barroom voice with ballroom range, Wennerstrom easily alternates between smoky, seductive tones and more robust, boisterous notes, transforming even the simplest lines into profound statements.  Nowhere is this more apparent than on the opening track, “Marathon,” an ode to the road, more poignant than the lyrics could ever suggest.  “Although I ran so far/That I’d forgotten what I was running from/And time takes you so far/I am longing be back home/On this long way home.”  It reads so plain.  Yet, when Wennerstrom adds her thing and her backing band plays joins her with the same type of gusto, accentuating both the highs and lows, delivering a magnificently arching melody when she really cuts loose, it’s hard not to be stunned.

Perhaps more impressive than this diversity is how effortless it all sounds.  Wennerstrom never fully relinquishes her twang and the band never finds themselves overmatched.  For as much time they spent on the road, sampling the local varieties of glam, hard rock, country and the blues they never lost their sense of self.  The comforting, peaceful swing of the cleanly picked “Low, Low, Low,” brings it all back to the place it started with the rustic, front-porch vibe of friends recalling the past with a drink and a song.  Except this time, something’s different.  Wennerstrom sounds triumphant, not despondent, when she sings of having a wandering soul.  For in addition to the gear and dirty laundry, she now has a kick ass rock album in the back of that van, and as we all know, a kick ass rock album can cure just about anything.    9 out of 10 on The Rockometer.