Warning: "continue" targeting switch is equivalent to "break". Did you mean to use "continue 2"? in /nfs/c06/h01/mnt/88637/domains/blog.irockcleveland.com/html/wp-includes/pomo/plural-forms.php on line 210
 I Rock Cleveland I Rock Cleveland | The Rockometer: Visions by Grimes

The Rockometer: Visions by Grimes 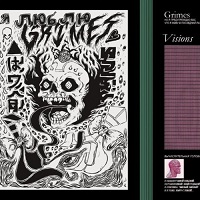 By taking ’80s pop out of the mall, stripping it of its bleached jeans and big, teased hair, and bringing into a future of IDM, krautrock, minimalist dubstep, and sampling, Claire Boucher of Grimes has made an album that is brilliant on so many levels.  And like any work of art hard to categorize, it’s lead many to attach a new label, one called “Post-Internet,” to her music.  It’s a label Boucher, herself, coined, and one she hasn’t sought to distance herself from.  Besides, how else could one explain the strange convergence of influences and otherworldly vocals on songs like “Genesis” and “Oblivion?”  Name another age when such recordings would have been possible.

Yet, for everything Boucher does extraordinarily well — She’s the dubstep Janet to James Blake’s Michael, the future pop to Sleigh Bells’ future rock, there’s one glaring deficiency.  Visions is cold and robotic.  It is so cold and robotic, it’s as  if it wasn’t made by a human at all, but by a replicant, the almost human, bio-engineered humanoid of Ridley Scott’s sci-fi classic, Blade Runner.

For those not versed in the world of sci-fi geekery, replicants looked and acted human, and in many ways they could pass as genetically human, but they had one fatal flaw — They could not fake emotion.  Show a replicant a picture of human or animal suffering and they’d feel no empathy at all.  Similarly, on the album track,”Oblivion,” Boucher  repeatedly sings the line “See you on a dark night,” to her love in her light, frosty falsetto and instead of inspiring feelings of excitement and longing, the listener is left blank.

Granted, there are those who  will read this review and dismiss its criticism as nothing more than a rockist using a classic rockist argument — Electronic music lacks emotion.  To those, I say, don’t be so quick.

The Brooklyn band Parts and Labor successfully made a name for themselves with their own brand of future punk by splicing  haywire electronics into common song structures.  They changed the sound of punk, but they didn’t abandon its ethos.  More recently, grunge survivor, Mark Lanegan, released the album Blues Funeral, an album where his bold and weathered voice was added to varying electronic styles with varying success.  The down-tempo track “Harborview Hospital” was brilliant, while the disco track, “Ode to Sad Disco,” sharply divided his listeners.

Then, there’s the case of Moby, one of the most successful electronic artists of the ’90s and ’00s, an artist who would either bring in soul singers, or sample old gospel recordings to lend a human quality to his music.  You see, it is possible to make future music and make it sound like it was made by a human.  Electronic music does not have to be cold.  Post-internet, future pop does not have to be replicant pop.  6 out of 10 on The Rockometer.