Warning: "continue" targeting switch is equivalent to "break". Did you mean to use "continue 2"? in /nfs/c06/h01/mnt/88637/domains/blog.irockcleveland.com/html/wp-includes/pomo/plural-forms.php on line 210
 I Rock Cleveland I Rock Cleveland | The Rockometer: Reign of Terror by Sleigh Bells

The Rockometer: Reign of Terror by Sleigh Bells 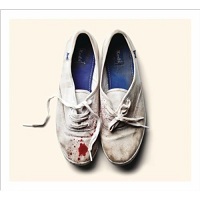 Before they became the second New York buzz band of 2012 to put in a shit performance for Saturday Night Live, Brooklyn’s Sleigh Bells were already a divisive group in the underground. For while there’s little doubt their sound is a modern one — Heavy metal guitar riffs lifted from the Mullet Rock compilation, cheery vocals and scattershot, electric beats — There’s always been the counter argument, “Is this really the sound of now we want?”

You see, subtlety, is not Sleigh Bells’ thing. The title to Reign of Terror’s lead track, “True Shred Guitar,” explains all you need to know about guitarist Derek Miller’s infatuation with ’80s metal.  Every sound out of his guitar is of the one-foot-on-the-amp, explosions-in-the-background-of-the-video-shoot, sexed-up-female-model-rolling-around-on-the-hood-of-a-red-convertible variety.  While Alexis Krauss sings every line, be it during a rocker or a ballad, in her best cheerleader voice.  In moderation, in the middle of an iTunes mix, let’s say, there’s a real chance you’ll find yourself cranking up a jam like “Comeback Kid.”

As an album experience, however, the Sleigh Bells trick gets grating right quick.  Remember kids, there’s a reason Nirvana made hair metal obsolete overnight, and it wasn’t due to collusion of the record companies, record stations, and MTV.  No, once the public were reminded that rock music could do more than communicate strip club scenes and hot teacher fantasies; That rock music wasn’t just for drop-outs and jocks and muscle cars, and those wanting to relieve their drugged out, drop-out days in the high school parking lot, the music stuck in that mold was revealed to be every bit as cheesy as it always was.  The facade, and thrill, was gone.    5 out of 10 on The Rockometer.