Warning: "continue" targeting switch is equivalent to "break". Did you mean to use "continue 2"? in /nfs/c06/h01/mnt/88637/domains/blog.irockcleveland.com/html/wp-includes/pomo/plural-forms.php on line 210
 I Rock Cleveland I Rock Cleveland | The Rockometer: Pre-Language by Disappears

The Rockometer: Pre-Language by Disappears 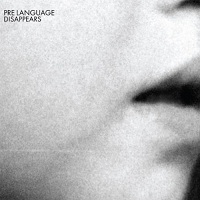 Even if we are to consider Disappears’ 2011 release, Guider to be their krautrock album (And really, when the entire B-side is taken up by an ode to krautrock pioneers, Neu!, there’s no other way to slot it), and Pre-Language, and its emphasis on negative space and repetition as their post-rock album, this Chicago quartet have always delivered a consistent, if not always invigorating mix of post-punk, psychedelic rock, and krautrock, tweaking the dosage of these three base elements from one release to the next, while never straining too far from their base guitar sound.

And for devotees of underground, guitar rock, the tones Brian Case and Jonathon van Herik can coax out of six strings are second to none.  With Sonic Youth drummer, Steve Shelley, now on board full time, some will draw the easy comparison to Thurston Moore.  One can just as easily go back further to Greg Sage and the influential, Pacific NW punk band, The Wipers.  For like Moore and Sage, Case and van Herik rely heavily on effects like tremolo, echo, re-verb and distortion, mixing cleaner, clear tones with moments of blurred frenzy.

On the album track, “Joa,” one hears the sound of an industrial sized alarm, the kind that blinks red, ringing at regular intervals, leaving no doubt that something is indeed fucked here.  While on “Love Drug,” the danger is dulled and smoked out, as if going down in flames means burning one down in the process.  Other times, the guitars take on the sound of Star Trek tech, you know, the soundboard effects added into classic sci-fi shows to let the viewer know that the red line crossing the screen isn’t just a red line crossing the screen, but a laser beam.

If there’s been a consistent problem with Disappears consistent output to date it’s that the band too often take their dedication to form, texture and tone too far on their records.  Live, Disappears can be an exhilarating experience, with the volume cranked high and those dueling guitars ricocheting off the walls, alternately lulling, then disorienting the listener.  Even on the best hi-fi, that experience can’t be replicated at home.  Instead, Pre-Language, like the two records which preceded it, too often feels like a study in how to make a rock album rather than an actual rock album.  6 out of 10 on The Rockometer.