Warning: "continue" targeting switch is equivalent to "break". Did you mean to use "continue 2"? in /nfs/c06/h01/mnt/88637/domains/blog.irockcleveland.com/html/wp-includes/pomo/plural-forms.php on line 210
 I Rock Cleveland I Rock Cleveland | The Rockometer: Open Your Heart by The Men

The Rockometer: Open Your Heart by The Men 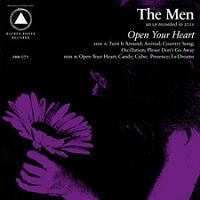 Even as some of the early press for The Men’s second album for Sacred Bones Records has focused on some of their newer influences coming through on Open Your Heart (Hey! There’s a country song! And pedal steel!) this New York quartet is still the same loud and rowdy outfit which didn’t as much open ears with their 2011 release, Leave Home, as they demanded attention be paid to this new breed of blistering Rock ‘N’ Rollers.

Go ahead and rack your brain if you want to, but few, if any bands in recent memory have displayed both an encyclopedic knowledge of Rock ‘N’ Roll, from metal and punk in the ’70s to the DIY ’80s and on through such niches as shoegaze and scuzz of the ’90s, and, this is key, stamp their own personality on everything they’ve taken in.  With cranked up, blasted out amps, and no agenda, except to pin everything to the red, when they channel The Stones from the Exile on Main Street era, they’re still The Men.  They play Sonic Youth like The Men, and The Replacements like The Men, and Black Flag like The Men.

In the world of The Men, where every song is played like the last song of the night and every night is the last night of their life, terms like lead and rhythm guitar serve little purpose when Mark Perro and Nick Chiericozzi are busy trading apeshit, rollicking riffs, as they do on the hard-charging, opening track, “Turn It Around.”  They even toss in a sly nod to Eddie van Halen and his twirling, high-pitched riff from “Panama,” the one that hits right before the big chorus.  But, there’s no such break here, just more raw destruction from Perro and Chiericozzi.  How it never collapses into a heap of self-congratulatory of wank rock is both a mystery and the key to the band’s success.

That pedal steel makes its first appearance on “Animal,” a track that’s country only if you consider a scenario where two records, one California hardcore from the ’80s, and the other, classic country, are perfectly matched, beat by beat, and then bled into oblivion.  Then, it sticks around for the aptly named, “Country Song,” an instrumental that blends into the motorik beat and buzzing, dual lead shred-fest of “Oscillation,” where Perro and Chieroczzi again engage in a game of fingers-on-fire, one-upmanship with neither ever able to overtake the other in speed, volume, or complexity.

Later, the title track, “Open Your Heart,” perhaps the album’s purest pop statement, gets a bath in the classic Rock ‘N’ Roll, bar room brew of beer, smoke, and sweat and somehow emerges sweeter for it.  The gnarled, creaky drone of “Presence,” and the wah-wah infatuated, “Ex-Dreams”, an alt-rock anthem ripped with a basement budget, both soak in a similar, dirty pool.

In an age where artists rush themselves into the spotlight, thinking they’re one YouTube away from quitting their day jobs; In an age where magazines and websites are chasing the same dragon, churning out content without care to quality, hoping to earn reputation in between page views as they try to stake some claim to that new band’s fame, the album that hits both on a visceral and intellectual level is indeed rare.  Open Your Heart is that album, a fully-formed vision and the antithesis of the technologically perfect record, auto-tuned and Mastered for iTunes; The album that answers the question, “Does Rock ‘N’ Roll still matter?” with both a fuck you and a yes.  11 out of 10 on The Rockometer.