Warning: "continue" targeting switch is equivalent to "break". Did you mean to use "continue 2"? in /nfs/c06/h01/mnt/88637/domains/blog.irockcleveland.com/html/wp-includes/pomo/plural-forms.php on line 210
 I Rock Cleveland I Rock Cleveland | The Rockometer: Leaving Atlanta by Gentleman Jesse 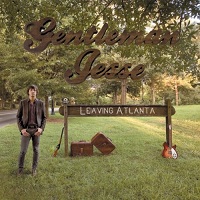 Sure, some of the guitar solos on Leaving Atlanta sound more like Clarence Clemons sax solos than guitar solos.  Opening track, “Eat Me Alive,” in particular, has an early E Street band vibe to it.  The new album is also little cleaner and more refined than Gentleman Jesse’s 2008, self-titled debut. Keys are more prominent in the mix, too. Still, to spend too much time on how album two differs album one would miss the larger point: No one around today has quite the same grasp of the Nick Lowe, Elvis Costello and Stiff Records era of power pop as Jesse Smith and his Atlanta band.  Check the kicked-up, attitude-infused shuffle on “I’m Only Lonely,” and “What Did I Do,” where Smith mimics the exuberance and emotion of a young Costello, or the simple, British Invasion inspired melody of “Careful What You Wish For,” and its earnest harmonies.   The man may sound like he always has too many words and not enough time to get them out, but he has a real penchant for putting aside modern distractions (And, boy, to read the pre-release press, the time spent between albums included a hospital stay from a vicious beat down and the deaths of many close friends) and focusing on those things that are timeless about Rock ‘N’ Roll.  With songs this strong, it hardly matters that the date on Leaving Atlanta reads 2012 and not 1977.    9 out of 10 on The Rockometer.