Warning: "continue" targeting switch is equivalent to "break". Did you mean to use "continue 2"? in /nfs/c06/h01/mnt/88637/domains/blog.irockcleveland.com/html/wp-includes/pomo/plural-forms.php on line 210
 I Rock Cleveland I Rock Cleveland | The Rockometer: Port of Morrow by The Shins

The Rockometer: Port of Morrow by The Shins 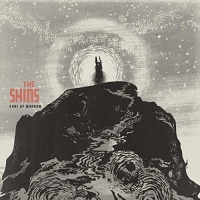 Prior to the recording of Port of Morrow, The Shins’ James Mercer did his best Axl Rose impersonation and booted everyone out of the band.  And while Port of Morrow didn’t take a decade to finish and didn’t require millions of dollars in backing, the results are just as disjointed as Rose’s comeback album, Chinese Democracy.

There’s the electro-pop of opening track, “The Rifle’s Spiral” and its awkward stab at modernization that consists of piling bleeps and keys and synths until, voila, future!  Chinese Democracy had lots of that, too.  “Bait and Switch,” meanwhile, draws its inspiration from French lounge music, not the original version mind you, but the dated, big-beat style  popular at the turn of the Century.   Were you anxiously awaiting the Fatboy Slim remix of “New Slang?”  Neither, was I.

In between, there’s a power ballad (“It’s Only Life,”) more disco dalliances (“No Way Down,”) and the best single the band have released in years.  That’s right, on the album that is the indie rock equivalent of Chinese Democracy, Mercer got one song absolutely right.  “Simple Song,” successfully updates the early sounds of The Kinks, that careful, quiet, and wistful sound which so dominated The Shins debut record, Oh, Inverted World, with an expansive and delicate mix of ambient electronics, buoyant rhythms, and celebratory guitar melodies.  There’s three, maybe four decades of pop in one track and not one element sounds pushy or out of place.  If only Mercer had taken his own advice when it came to penning the rest of the album, and, you know, kept things a little simpler.  5 out of 10 on The Rockometer.