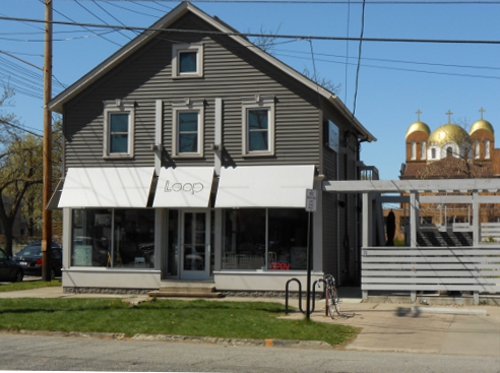 On a well-trafficked corner, in the trendy, Cleveland neighborhood of Tremont, Loop has begun to carve its own niche in the city’s vinyl scene, and art scene, and coffee scene.  That’s a lot of niches for a shop of its size.

Often when I visit Loop, I get the feeling that the store’s record business isn’t exactly where the owners want it to be.  When you step inside, you’ll see what I mean.

The cafe resides on the ground floor.  On the walls, you’ll see works by local creative types.  All of the art is for sale, and they do pour a good, strong cup of joe, too.  If this was a review for I Rock the Cleveland Coffee Scene, and not I Rock Cleveland, Loop would score high numbers all around. Not just for its taste in coffee and its friendly staff, but this is an attractive space, too.  The outside may look like your typical, sturdy, old home, but inside everything is sleek and modern, a mix of light earth tones and polished metallics.  When the weather’s nice, you can enjoy your quality cup out on the small patio.

Aside from a few records displayed at the main counter, there’s little indication you are in a record store.  The name, itself, doesn’t do a good job communicating exactly what’s inside.

There is a larger display in the rear of the cafe where many of the newer, featured releases share space with coffee gadgets, and there is a sign on the stairwell that reads, more records upstairs.  We’re getting closer. 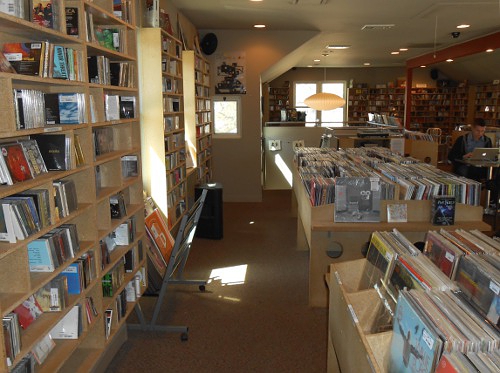 Up on the second level, it would be easy to mistake Loop for a library, or even an Ikea showroom.  Small tables line the room, and overlook the ground floor.  During lunch hours these tables are in high demand for those in need of a quiet space and a wi-fi connection.  And while there is often music being piped through the store, the space still lacks a vibe.

Now, despite all of those areas where Loop could improve in terms of being a record store, it does offer a current and varied selection in their bins.  They neither try to bring in every new release, nor do they go out of their way to be too cool for you.  There are both popular and obscure records and once you spend some time browsing, you’ll find it to be a thoughtful mix, too.  This is a place where the staff is eager to share their taste with you.

The bad news is if you think you want to buy one of those records and have a question about that particular piece of vinyl in your hands, you have to go back downstairs and hope there isn’t a long line for the coffee.

Granted, you may have a different experience when you visit Loop.  I tend to stop by during lunch breaks from my corporate job and from 11-1, it’s a cafe that happens to sell records, not the hip vinyl hangout it so wants to be.  And you know what?  I’m ok with that.  Records and coffee just happen to be two of my favorite things in the world, and while the record store part of the business isn’t perfect, I can get both quality music and a quality cup in one stop.

Website: http://www.facebook.com/loopintremont
Address: 2180 West 11th Street, Cleveland, OH 44113 (Map)
Selection: Loop offers a tightly curated mix of indie rock, electronic, outsider music, and classic reissues.  You can find new releases from the likes of The Black Keys, Cloud Nothings, Magnetic Fields, and Frankie Rose as well as something like the recent Boddie Records compilation from Numero Group.  There is a used section, too, although it hasn’t proven as fruitful as some of the other stores in town.
Price: Most new records retail between $14 and $20.  Occasionally, they will bring in extra fancy editions, like the Jay-Z/Kanye West record that was stickered over $100.
Sample Finds:  I have to be honest with you, I’ve spent more money on coffee, at $2/cup, than I have on vinyl at Loop.  Recently, however, I did pick up that Sunn O))) meets Nurse With Wound reissue, a record I hadn’t seen for sale anywhere else.