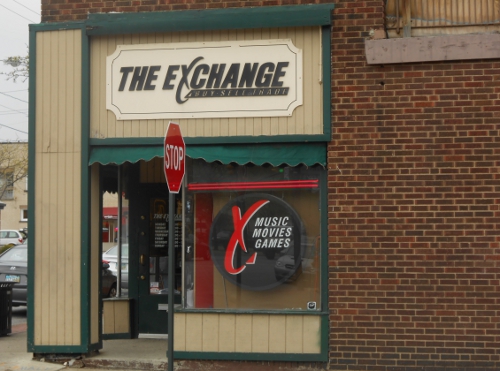 For years, The Exchange in Lakewood hadn’t a clue to do with their LPs.  First, they’d find a home for them in between all the CDs, DVDs, Blu-Rays and games and such and within weeks, those bins would become big racks of frustration.  New records would be mingled with the used.  Neglect would render the alphabet useless as an organizational guide.  The Black Keys may be with the other B’s and there may be a couple more records by the Black Keys stashed behind Van Halen in the S’s or with Credence Clearwater Revival in the T’s.  Sometimes, an employee would take initiative and clean up the vinyl section.  I’d say, “Thanks for straightening things up.”  A month or two later and that new home would go to pot just like the old home and we’d be back to The Black Keys in the B’s, S’s, and maybe T’s.

Recently, The Exchange moved their used vinyl again.  This time to its own, stand-alone display in the rear of the store and ever since that move, it’s been organized.  The New vinyl section also has a new home in a rear corner of the store, and it too, has been kept tidy. 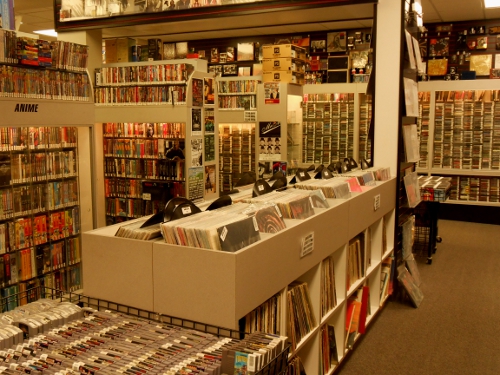 Now, this may not be a big deal to some.  The standard reply whenever I say it’s the next stop on one of weekend record shopping trips tends to be along the lines of “Why the fuck would you go to the Exchange for?” But, and this may shock you, this particular Exchange, located on the corner of Detroit and Gladys, has this habit of turning up absurdly good records.  For example, my near-mint copy of Guided by Voices’ classic album, Bee Thousand, pressed on red vinyl, came from The Exchange. 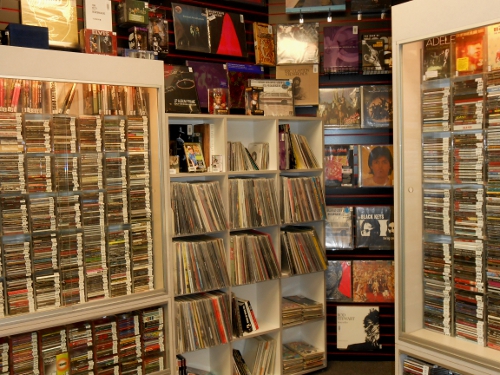 While the shopping experience has improved greatly for vinyl junkies at this particular Exchange, there is one area where they could still make strides, and that’s pricing.  For while they may turn up some wild finds, they also like to wildly mark up said finds.  That GBV record of mine wasn’t cheap.  There’s a Jeffrey Lee Piece solo album probably still in the used bins as I type here tonight.  I’ve had it in my hands multiple times, only to put it back in its alphabetized place.  I’ve held hard-to-find LPs by Jesu and Pelican and Mono and I’ve put them all back.  One weekend, as I was making my rounds to area’s record stores, I spotted a couple early Grandaddy LPs.  This was about the same time those same Grandaddy LPs just got reissued.  The used copies at the Exchange were still marked at $50.  I could go on and I’ll still go back.  I’m a record collector.

Website: http://www.yelp.com/biz/the-exchange-lakewood
Address: 15100 Detroit Ave Lakewood, OH 44107 (Map)
Selection: The new section contains mostly popular releases, the stuff you’d buy when first assembling your record collection.  You can find the Black Keys, Bob Dylan, and Jimi Hendrix but not much from even the most popular indie labels like Matador or Sub Pop.  They have some records that are really quite absurd.  And by absurd, I mean Sublime picture discs.  The used section turns up quite a few quality punk, hardcore, metal and indie records.  Underneath the bins for used Rock and Pop records, there’s a strong selection of used Rap and Hip-Hop LPs and 12″ singles, too.  Besides LPs, the Exchange carries CDs, DVDs, Blu-Rays, games for multiple consoles, and tchotchkes.  The store has a lot of tchotchkes, knickknacks, trinkets and kitsch.
Price: New LPs tend to be comparable in price, or maybe a dollar or two higher than other local stores in some instances.  I’ve scored some quality 12″ Hip-Hop singles for as little as $1.00.  At the same time, they will aggressively mark-up used LPs when they know they’ve got something good.
Sample Finds:  Boss Hog – Whiteout (Used); The Breeders – Pod (Used); The Clash – Black Market Clash (Used); De La Soul – A Roller Skating Jam Named Saturday  12″ (Used); The Dirtbombs – Dangerous Musical Noise (Used); Guided by Voices – Bee Thousand (Used); ODB – Got Your Money 12″ (Used); Pearl Jam – Vitalogy (New/Reissue); Pearl Jam – Vs (New/Reissue); Thin Lizzy – Jailbreak (Used).