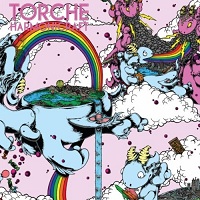 The question, when is more of the same no longer a good thing, is one critics often have to confront. It’s also a question that has no rules and no easy answers. The Ramones made a career out of recording the same song and same album. The Clash, on the other hand, were constantly morphing, taking in new influences like dub, reggae, disco, and hip-hop along the way. Yet, few would dismiss either band’s importance in the history of punk rock.

More confoundingly, the answer for when a band should or shouldn’t move on from their signature sound often reveals itself only when the act in question has made the decision to follow a new path and proceeded to make a righteous mess of an album. In 2008, the Vancouver band, Black Mountain released In the Future, one hella, impressive LP of storming, psychedelic metal. For their follow up, 2010’s Wilderness Heart, they stripped away many of their epic qualities. Gone were the sixteen-minute jamathons of power riffs and smoked out bliss. They had been replaced by anonymous retro rock songs that could have been recorded by any number of longhairs stuck in the ’70s. In this case, more of the same wouldn’t have been such a bad thing.

So, yes, I can see how a reviewer like Grayson Currin at Pitchfork could arrive at the conclusion that Torche’s Harmoniacraft is stale, lacks new ideas, and is otherwise indistinguishable from their earlier work. I’ve written similar paragraphs, like the one below, myself.

The band’s early works (and live shows) came possessed by extreme senses of adaptability and possibility, with heavy lumber erupting from heartfelt limber without notice, and vice versa. On Harmonicraft, those assets are subsumed largely by structures and strategies that feel settled from the start. “Reverse Inverted” comes off like a song Torche simply forgot to put on any of their previous releases; the chug of “Skin Moth” picks up the pace and even adds a bit of falsetto at the start of the hook, though it otherwise might as well be mimeographed from Torche’s seven-year-old debut. Despite the new member, the group’s stylistic approach feels petrified here, with frontman Steve Brooks constantly staggering his way through mid-tempo verses before shouting mantras above harmony-heavy choruses. Though it’s less than 38 minutes long, Harmonicraft starts to mire in monotony before it is half over.

Saying I can see where Currin is coming from isn’t the same as saying I agree with him, however. When considering Torche and their latest album, Harmoniacraft, I struggle to come up with another band like this Southern power crew who can convincingly and consistently deliver sets of fist-raising, heavy metal power-pop, grunge, sludge and doom.

By nature, Torche albums are unpredictable. In between “Kicking,” the first heavy rock hit of the album and the next two (“Smakes Are Charmed” and Skin Moth,”) there’s a big ball of bludgeon (“Reverse Inverted,”) evil Sabbath stoner rock (“In Pieces,”) and ’80s thrash metal (“Sky Trails.”) Each song is technically precise, intense and relentless.

If being the masters of all things heavy is no longer good enough, the question now becomes what’s the band to do? 30 minute drones? Dance pop? A power ballad? How about they paint their faces like clowns and do a hip-hop collaboration? No thank you, oh hell no, no thank you, and I fucking hate clowns. Let’s stick with the heavy rock hits.   8 out of 10 on The Rockometer.