Warning: "continue" targeting switch is equivalent to "break". Did you mean to use "continue 2"? in /nfs/c06/h01/mnt/88637/domains/blog.irockcleveland.com/html/wp-includes/pomo/plural-forms.php on line 210
 I Rock Cleveland I Rock Cleveland | The Rockometer: Money Store by Death Grips 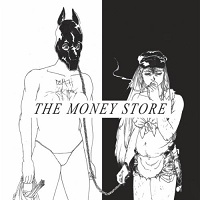 Death Grips are angry.  Even a cursory listen to Money Store, the Sacramento trio’s first album for Epic Records, reveals an uncompromising sonic landscape of punk, hip-hop and noise steaming with rage and paranoia.  Trying to determine where vocalist Stefan Burnett is directing all of that pent-up emotion, however, is another thing.  The man spits militant lines, not necessarily rhymes, like his ticker is running double time and his cheeks are bulging with shards of broken glass.

Neither does the production team of Zach Hill and Andy Morin  do the listener any favors.  Found sounds are deconstructed and regurgitated and rhythms rarely stick to a recognizable pattern, freely alternating between pitched up, drum and bass and more plodding patterns.  Do you hear the ring of grandma’s doorbell?   Or, the banging of pots and pans?  Or, the sound of a racing game on a vintage console?  Maybe that really was the doorbell of someone’s grams.  With the highly processed and ragged nature of these samples it’s really hard to tell what really is a sample of an everyday sound and what could be a more traditional instrument given a similarly brutal treatment in the studio.

The end result is a suite of songs that are uncompromising, uncomfortable, and hard to ignore.  Even at their most pop, as on “I’ve Seen Footage,” it’s hard to escape those feelings of claustrophobia and anxiety.  Here, the ramblings of a street-corner philosopher are spliced with an old skool, hip-hop beat and sirens and guitars that sound like sirens or more sirens.  It’s like watching a split screen of Cops with a mad man raving in the back seat and an old episode of Yo! MTV Raps showcasing the latest jam from Tone Loc.  Or, Public Enemy remixed for the 21st Century.  Or, the end of the world being broadcast right before your eyes, ultra violence and desperation, broken windows and fire fights.  With Death Grips, the specifics may be be elusive, and the music may be hard to pin down, but the impact of their message is clear — Shit is not right here and this is the soundtrack.  8 out of 10 on The Rockometer.