Warning: "continue" targeting switch is equivalent to "break". Did you mean to use "continue 2"? in /nfs/c06/h01/mnt/88637/domains/blog.irockcleveland.com/html/wp-includes/pomo/plural-forms.php on line 210
 I Rock Cleveland I Rock Cleveland | The Rockometer: S/T by King Tuff

The Rockometer: S/T by King Tuff 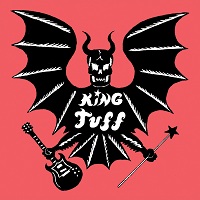 With a preference for ripped jeans, tees and baseball hats, King Tuff’s Kyle Thomas doesn’t look the part of rock star. Not even the rocker hair flowing behind that brim communicates rock style. It’s too scraggly and unkempt. And with song titles like “Alone and Stoned,” “Loser’s Wall,” and “Stupid Superstar,” one wouldn’t necessarily peg him as an especially ambitious musician, either. Maybe a slacker with an unhealthy pot and Doritos Locos Tacos habit, but not, definitely not a pop star.

Ah, but as often the case, first impressions can and do deceive. Not only does Thomas front King Tuff, but he had an earlier band, Happy Birthday, also release an album for Sub Pop, and he’s done two albums with the J Mascis, heavy-metal side project, Witch, all in the past six years. Just as surprising, the songs on King Tuff’s self-titled, second album reveal a man who’s practically a pop savant, able to incorporate any variety of grooves from the free-wheeling ’70s into his own brand of good time music for squares. It’s a sound that led Dave Marchese of Spin to compare him to a ball-cap wearing Marc Bolan, and one that turns the suggestion in the liner notes, “Dance ’til you fuckin’ die (heart KT heart)” into a natural reaction.

Nowhere is Thomas’ fun loving attitude more apparent than on  “Keep on Movin,'” a playful track of salvaged ’70s, guitar-driven, dance-pop that would fit naturally along side a Bay City Rollers song on your next party playlist. Who knows? It could have been a direct response to the ‘Rollers first single, “Keep on Dancing.” Either way, it’s a number that all but calls for a video of oddballs doing their own versions of the Frankenstein, Creepy Crawl, and Spanish Fly on through the bridge and its luminescent guitars, on to the goofy sing-song, sing-a-long, and through to the final chorus.

Next, the soft keys and whispered vocals of “Unusual World,” bring to mind images of hand-holding at the roller rink and make-out sessions in a dad sedan. Later, “Bad Thing,” kicks things up considerably with a sultry, Southern rock lead and the strutting, bar-rock of “Stranger,” gets a double shot of fun with a fast-fingered, hair metal riff.

In his career, Thomas has done folk, garage rock, power pop, and metal, but one get’s the feeling that glam is where he’s finally able to be himself. He can smooth out that high-pitched, nose, permanently pinched, voice of his and make it groove. He can toss a grunge rock lead in the middle of vintage Bowie (“Loser’s Wall,”) and marry the agitated, guitar screech of The Clash’s “Police on My Back” with the slinky seduction of T Rex songs like “Born to Boggie,” “I Love to Boogie,” and “Zip Gun Boogie,” as he does on “Hit and Run,” and do it with such nonchalance that it almost seems too easy.

One thing Thomas can’t do, however, is be that kind of rock star who thrived in the ’70s. Thomas may have used ’70s pop and glam as inspiration for his album, but he’s not one of them and neither does he intend to become one. “Stupid Superstar” lays it out quite plainly:

You see, success for Kyle Thomas and King Tuff won’t be measured in kilos, cars, or bedroom conquests. Instead, he’s just looking for you to uncross your arms and loosen your legs from the bar stool. He wants you to sweat and move and smile at a Rock ‘N’ Roll show. And, well, dance ’til you fuckin’ die. Trust me, with this album it will all come to you naturally, and you, too, will be doing your very own oddball Frankenstein in no time. 9 out of 10 on The Rockometer.