Warning: "continue" targeting switch is equivalent to "break". Did you mean to use "continue 2"? in /nfs/c06/h01/mnt/88637/domains/blog.irockcleveland.com/html/wp-includes/pomo/plural-forms.php on line 210
 I Rock Cleveland I Rock Cleveland | The Rockometer: Celebration Rock by Japandroids

The Rockometer: Celebration Rock by Japandroids 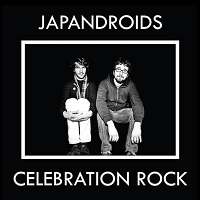 The rock anthem, that old Rock ‘N’ Roll standard birthed in the arenas of the ’70, popularized by the likes of The Boss and Jon Bon, bastardized by hair metal in the ’80s and emo in the ’90s and Nickelback, and co-opted by pop singers and punks alike, has seen a resurgence in recent years thanks to bands like The Hold Steady, The Gaslight Anthem and Japandroids who have taken a no nonsense approach to a form which once based its very existence on the notion of extravagance.

For Japandroids, this back to basics approach means there are no power ballads and the only frill to be found on Celebration Rock’s eight tracks is the occasional dramatic pause used to set up another round of drums like home run fireworks, ratcheting and ecstatic guitars, and a whole lotta “Whoas” and “Ohs.” They may channel the spirit of the Boss, but their roots are set firmly in punk rock and noise rock.  Consequently, even as this album is basically one attempt to whisk a bummer away with the optimism of feel good rock followed by another, it never feels overwrought or too simplistic in its outlook.  Brian King and David Prowse truly believe in the healing power of rock, and aren’t ashamed to profess their optimism as they recount challenging times in the most glorious way possible on songs like “Nights of Wine and Roses, “The House that Heaven Built,” and “Younger Us.”  Put Celebration Rock on your turntable, or load this album on your car stereo, turn it up loud, and you’ll have a hard time disagreeing with them.  9 out of 10 on The Rockometer.