The Rockometer: Class Clown Spots a UFO by Guided by Voices 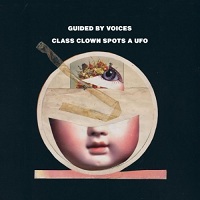 Know this: You are reading a review for the new Guided by Voices album by someone who has over 20 pieces of Guided by Voices vinyl in his record collection. This is not counting CDs and other Robert Pollard projects like solo albums and other Polllard bands like Boston Spaceships. This is also someone who’s willing to spend over $100 for a copy of Tonics and Twisted Chasers in good condition, but not over $200. My fandom does have its limits. In other words, the relationship between I Rock Cleveland and Guided by Voices is similar to that of Pitchfork and Animal Collective — It often can be difficult to differentiate between fandom and criticism, and the two are often blurred to the point where they become one and the same.

With that being said, you should know this, too: Class Clown Spots a UFO, the second album by Guided by Voices since the “classic lineup” of Pollard, Tobin Sprout, Mitch Mitchell, Kevin Fennel and Greg Demos reunited for an extended tour and at least three new albums (The third of which should see the light of day this fall) is easily in my top six or seven of all Guided by Voices releases. On some days, like the past few days where its been all I’ve listened to, it can reach as high as five. Guided by Voices may never top that four album streak of Propeller, Bee Thousand, Alien Lanes, and Under the Bushes, Under the Stars. Hell, few bands have enjoyed such a period of tip-top performances like they did from 1992-1996.

If 2012’s first GBV album, Let’s Go Eat the Factory was the sound of five old friends rediscovering the joys of recording together, then Class Clown Spots a UFO is the sound of that same group reclaiming their spot amongst the indie rock elite.

Like their best albums, Class Clown Spots a UFO is a patchwork assembly of rockers and ballads, showcasing Pollard’s continued dedication to the four P’s of rock — Punk, Pop, Progressive, and Psychedlic, and Sprout’s reclaimed role as the Pollard foil, adding tender moments of straightforward pop whenever Pollard threatens excess. But, unlike some of Pollard’s later work, and some may make this point even with those classic albums, the band is no longer indifferent to quality. On Sprout’s numbers especially, good enough for a record is no longer good enough. Songs like “Forever Until it Breaks” and “All of This Will Go,” have a sense of maturity and dedication to craft seldom evident in the ’90s. Then, there’s the title track, “Class Clown Spots a UFO,” which borrows the finely-tuned majesty of the Beach Boys on Pet Sounds, and “Keep It in Motion,” whose smooth, mid-tempo and clear vocals were done in the tradition of radio-ready power pop.

And when a track does show its rough edges, it’s not from lack of trying. Rather, rowdier numbers like “Hang Up and Try Again” and “Billy White,” both benefit by keeping Mitchell’s guitars blunt and bullying, like a series of gut punches. Similarly, “Tyson’s High School,” succeeds because it permits all of its guitar tracks to elbow themselves into the mix with power and purpose, each seemingly taking on one of the four P’s independent of the others in an epic schoolyard brawl destined for Youtube stardom with only an over-sized drum beat and Pollard’s comfortable drawl attempting to keep things in check. There are literally hundreds of ways a song like “Tyson’s High School” could be bungled, and most would involve trying to reign in the maddening din from that epic guitar fight.

With a little more time, Class Clown Spots a UFO has the potential to make a move into a top four or top five rank in the list of greatest Guided by Voices records of all time. I haven’t even mentioned other album highlights like “Jon the Croc,” “They and Them/Fighter Pilot” and “Be Impeccable.”

The ultimate test will be how these numbers stand up to GBV classics after Uncle Bob and myself both have a chance to tip back a few (ok, a whole lot of) domestics on the upcoming summer tour. Let’s see what happens in Philadelpia and Cleveland and maybe Pittsburgh (it won’t take much convincing if I’m to add a third spot on my personal GBV tour). And while I can’t predict the future, all signs point to this superfan critic greeting cuts from Class Clown Spots a UFO with cigarettes and rock kicks, spilled beer and loud, slurred cheers of “GBV! GBV! GBV!.” 11 out of 10 on The Rockometer.