Warning: "continue" targeting switch is equivalent to "break". Did you mean to use "continue 2"? in /nfs/c06/h01/mnt/88637/domains/blog.irockcleveland.com/html/wp-includes/pomo/plural-forms.php on line 210
 I Rock Cleveland I Rock Cleveland | The Rockometer: Half Blood by Horseback

The Rockometer: Half Blood by Horseback 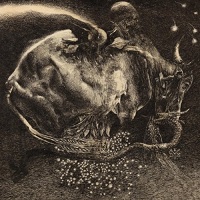 Horseback’s Half Blood is one of those metal albums that’s metal only by virtue of being on a metal label (Relapse Records) and having vocals delivered through a blood-encrusted throat. Early on, “Mithras” and “Ahriman,” deliver deep, deep doom grooves with repetitive bass lines and warm organ sounds, lending each track an elemental feel as good vibes and bad, are doing the yin yang thing. These are freak outs in both the good and bad way. In the right mood, that bass can place one in a state of mind where you can “Om” the pain away. In the wrong frame of mind, and let’s admit it, with the wrong drugs, they can produce a freak out of maggots crawling on your arms variety.

Later, Horseback dabble in free-form drones where anyone can play as long as that instrument you brought along can do a good screech or a convincing tweak (“Arjuna”) and those where you cool to join in as long as you turn it up really, really loud in the Sunn O))) tradition (“Hallucigenia II: Spiritual Jerk.”) Hints of early German techno even creep into the mix during the album’s final cut, “Hallucigenia III: The Emerald Tablet.”

While one could conceivably argue there’s nothing new to be heard on Half-Blood, it’s much more difficult to argue that Horseback’s expansive vision of heavy, one which expertly borrows from decades of both Rock ‘N’ Roll and more experimental strains of music, does not produce a compelling and provocative whole. And if Satan singing lead still gives you goosebumps, think of it this way: Crusty throat is nothing more than a new auto-tune setting. Now, find your comfortable place and find yourself a copy of Half Blood. 9 out of 10 on The Rockometer.