Warning: "continue" targeting switch is equivalent to "break". Did you mean to use "continue 2"? in /nfs/c06/h01/mnt/88637/domains/blog.irockcleveland.com/html/wp-includes/pomo/plural-forms.php on line 210
 I Rock Cleveland I Rock Cleveland | Wonderful Fest Returns Bigger, Better, Not Badder 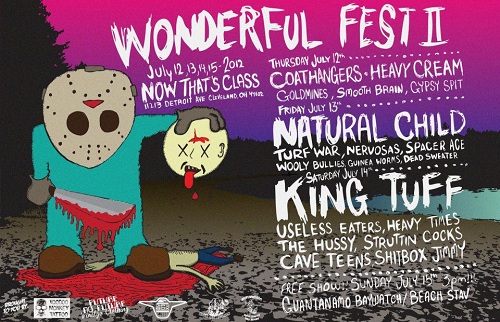 Wonderfulfest, that kinder and gentler cousin of Cleveland’s long-running scum-punk festival, Horrible Fest, is returning for 2012 and has expanded to four days.  Unlike last year, all of the main events will be taking place at Now That’s Class on Cleveland’s west side, and tipped to headline on Saturday night is none other than King Tuff.  Don’t know King Tuff?  It’s time to get knowin’ and get excited for their Cleveland debut.

Also scheduled to appear are a pair of up-and-comers from Nashville’s burgeoning rock underground (Heavy Cream on Thursday and Natural Child on Friday), one of Hozac’s finer young bands (Heavy Times) and recent fixtures on the Cleveland garage-punk scene like the Wooly Bullies, Cave Teens, and Shit Box Jimmy.

More information can be found at the Wonderfulfest website, here.  Advanced tickets can be purchased at face value at Now That’s Class, in person and online, as well as the following locations: Motorhead’s (15115 Chatfield Avenue), Future No Future (15027 Madison Avenue), The Lion on Lorain (12703 Lorain Avenue), and Voodoo Monkey Tattoo (2070 W25th Street).

The full lineup is below: