Warning: "continue" targeting switch is equivalent to "break". Did you mean to use "continue 2"? in /nfs/c06/h01/mnt/88637/domains/blog.irockcleveland.com/html/wp-includes/pomo/plural-forms.php on line 210
 I Rock Cleveland I Rock Cleveland | What I Did on My Summer Vacation

What I Did on My Summer Vacation 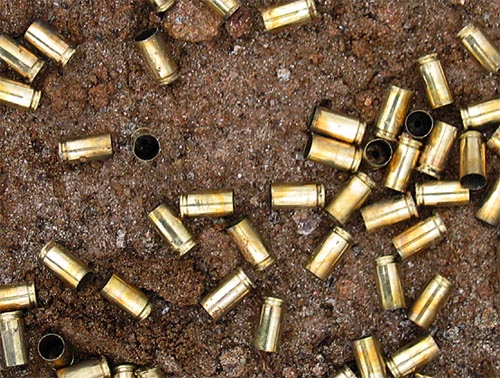 Two bleeding-heart, pinko-commie liberals walk into a gun range in South Philadelphia.  It’s not the start of a bad joke lifted from the NRA website.  No, it’s how my summer vacation began in Philadelphia.

How this particular hippie-pacifist ended up at the Philadelphia Archery and Gun Club isn’t much of a story.  Guided by Voices are on tour and had a stop in Philly at the Trocadero.  I have a good friend in Philadelphia.  I said to good friend, “Jeff, you’re going to see GBV with me at the Troc.”  A couple weeks later, Jeff said, “How would you like to shoot some guns while you’re in town?”  A month later, there I am, in front of an otherwise nondescript storefront along side a bodega, produce market, and tightly packed row houses.

The first thing one notices once you’re inside the Philadelphia Archery and Gun Club, aside from the fact that there’s a whole lotta guns and very little archery, is that every employee at the range has a piece strapped to his side.  Now, normally, I’m not the type to believe everyone needs a gun for self-defense, but in this setting, where guns are all around and everyone coming into the shop is in the market for a gun or heading up to the range to fire a gun, it makes perfect sense.

Don’t believe me?  Perhaps our instructor, John Johnson, could better explain the need for a well-armed staff at a well-armed store.  As we were taking our mandatory gun safety class, Johnson, a slim man in his mid-fifties with tightly cropped grey hair, unblinking eyes and extra veins in each arm, would recount how novices would come to the range and inadvertently point a gun at their own head, at their friends, at their johnson (John Johnson liked to refer to the penis as a johnson and the mouth as a cocksucker) or at their instructor and with each story, Johnson would add, “I nearly had to put two rounds in him.”  Yes, the Philadelphia Archery and Gun Club takes safety seriously.  And that man with the eyes and the veins, who used to train government secret-service types, and who really did have a sense of humor about him, had a zero tolerance policy towards shenanigans.

Think about that for a moment.  Think about a man who has never held a gun, a man who was never allowed to have toy guns as a kid, a man who has already described himself as a bleeding-heart, pinko-commie.  Think about how that man who is also talented in the fine arts of clumsiness and forgetfulness must feel as he’s heading up the stairs to the firing range.  Nervous doesn’t quite capture the feeling of being in that cramped space of a range with one narrow walkway and eight lanes for target practice and the sound of “Pop!  Pop!  Pop!” penetrating the walls.

Consequently, when it was time to start shooting, I took my one step back and let Jeff fire the first 25 shots.  To my surprise, and to the surprise of John Johnson, those first 25 shots, in quick succession, ripped a gaping hole right through the heart of the paper target.  Up here on the range, Johnson was in his element, laughing and laughing and lauding Jeff as a natural-born assassin.

Now, it was my turn.  Nervous, but no longer shaking.  I didn’t want to be afraid.  I didn’t want to disappoint John Johnson.  So, I stepped up and planted my feet in the proper shooting position.  I locked my elbows in the proper firing position.  I focused.  I tried to focus and I squeezed a shot.  As my nine millimeter recoiled up and to the right, I could see that I hit the paper target square in the johnson.  I was aiming for the paper heart.

My next 24 shots followed a similar pattern.  Try not to be afraid.  Try to align the sights.  Eventually give up on aligning the sights.  Try to hit the paper heart and instead hit the johnson.

When it was time to fire my final 25 shots, John Johnson gave me some crucial advice.  He said, “Aim for the cocksucker.”  I took a deep breath, exhaled, got that cocksucker in my sights, and pulled the trigger.  Right ventricle.  Then, left ventricle, left atrium, right atrium and aorta.  I could shred a heart just like my assassin friend.  All I had to do was not aim for the heart, but for the cocksucker.

After I made it through my fifty rounds, I quickly placed the gun in the safe position, magazine out and pointed towards the target, peeled off my glasses and head gear, and muttered something about a cigarette before Johnson could even finish asking me if I wanted to shoot another fifty rounds.

Look, I’m glad I learned how to handle and fire a handgun.  It’s a skill every man should learn, like basic auto repair, carpentry, and plumbing.  Plus, there could be a zombie apocalypse.  The Florida face-eater was not on bath salts.  Maybe the Mayans are right and the world will end this December.  There could be a nuclear apocalypse or global warming could render our nation’s farms infertile and cause chaos in the streets as food prices rise to ridiculous levels.  It could happen and if it happens these skills I learned at the Philadelphia Archery and Gun Club will be absolutely necessary for both my survival and the survival of the human race.  Or, when the world goes to shit, I could always just try to find Will Smith.  He’s survived zombies.  He’s survived multiple alien invasions.  He’s a good shot, and he’s entertaining.