Warning: "continue" targeting switch is equivalent to "break". Did you mean to use "continue 2"? in /nfs/c06/h01/mnt/88637/domains/blog.irockcleveland.com/html/wp-includes/pomo/plural-forms.php on line 210
 I Rock Cleveland I Rock Cleveland | The Rockometer: Hypnotic Nights by Jeff the Brotherhood

The Rockometer: Hypnotic Nights by Jeff the Brotherhood 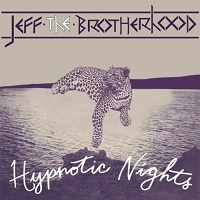 Dan Auerbach knows a thing or two about big rock records.  El Camino, the latest album released by his band, The Black Keys, eschewed the diverisity of blues, soul, hip-hop and classic rock found on its predecessor, Brothers, in favor of more arena-ready sounds with big guitar riffs aiming to cleanly reach the rafters.  Perhaps, then, it isn’t such a surprise that this Jeff the Brotherhood record by Nashville brothers, Jake (guitar/vocals) and Jamin Orrall (drums), prodcued by Auerbach, exiles both the grunge and sludge of their Third Man 7″ and the wild, psychedelic freak-outs found on their Record Store Day 12″ EP to the fringes, allowing muscular power pop and slacker rock to reign in their stead.  Details, like the motorik beat which opens both “Wood Ox,”  and “Hypnotic Winter,” and the twisted modulation which squashes the last thirty seconds of “Staring at the Wall,” do hint at the brother’s ambition.  And when Jake stomps the pedals, he does have a heavy and righteous, bulldozing, low-end tone, part Black Sabbath and part Black Keys, and one that is versatile enough for feel-good, summer numbers like “Six Pack.”  Still, for a major label debut where the brothers managed to retain the all important, creative control, it’s hard to escape the feeling that Hypnotic Nights could have been so much more.  7 out of 10 on the Rockometer.