Warning: "continue" targeting switch is equivalent to "break". Did you mean to use "continue 2"? in /nfs/c06/h01/mnt/88637/domains/blog.irockcleveland.com/html/wp-includes/pomo/plural-forms.php on line 210
 I Rock Cleveland I Rock Cleveland | The Rockometer: Yellow and Green by Baroness

The Rockometer: Yellow and Green by Baroness 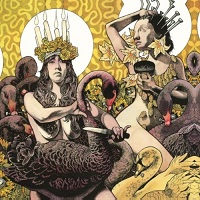 Let’s play a game of fill in the blank.

a) A steaming pile of shit.
b) The biggest steaming pile of shit released by Metallica until they put out Load, St. Anger, Death Magnetic, and their biggest, steamiest pile of shit, Lulu.
c) Metallica? Aren’t they band that sued Napster and don’t they like to shop at Gucci?
d) The point in their career where the band fine-tuned their thrashing, heavy metal sound to one which could reach a wider audience. And, really, what does it matter if you’re metal or no longer metal? It’s all about the jams and the Black Album has its jams.

Why, again, are we talking about Metallica during a review of Yellow and Green, the latest by the Southern, sludge-metal band, Baroness, you ask? Well, like Metallica, Baroness have toned down the shred factor from their previous efforts to the point where they’re not exclusively metal. There are tracks here that are, gasp, radio-ready. And if you were one of those who answered A or B, to the preceding question, there’s a strong chance that you’ll have a similarly negative reaction to the mainstreaming of Baronness as you did to the day Metallica went pop.

For those still reading along (and, yes, if you answered A or B to the previous question you are excused from the review), there’s a lot to take in during Yellow & Green’s 18 tracks and 75 minutes.  Immediately noticeable, those radio-ready tracks like “Take My Bones Away,” “March to the Sea,” on the Yellow half, and “Board Up the House,” and “The Line Between” from the Green half, prove Torche isn’t the only Southern band of hard-rockers strongly embracing melody these days.  And like their heavy brethren, Baroness are fond of adding nods to their past throughout these tracks, whether it’s a short progressive rock embellishment over a bar, or an extended thrash lasting a minute.  Yes, the burliness and technical acumen of their previous work remains, albeit in pieces, and minus the screaming.

Yet, it’s not the abundance of potential singles that makes Yellow & Green one of the essential rock albums of the year.  It’s what the band does in between those tracks.  Showcasing an independence of thought and a disdain for genre conformity, principal John Baizley (rhythm guitar, lead vocals) with Peter Adams (lead guitar, vocals), Matt Maggioni (bass), and Allen Blickle (drums) are never short of ways to expand their own definition of heavy. “Twinkler,” for example finds the quartet venturing into elemental, drone-folk. While the soft-loud dynamics of “Eula,” recalls Radiohead in their simpler days. Later, the instrumental track, “Green Theme,” wields the unlikely combination of soothing, dream-pop melodies and majestic, maxed out guitar solos fit for a fireworks show with uncommon ability. Lastly, “Psalms Alive,” rides, shock of shocks, a choppy, electronic dance beat, a skittish bass rhythm and deliberate guitar chords for almost one minute and forty-five seconds before properly rocking.  Those who were excused earlier will likely point to “Psalms Alive” and its successor, “Stretchmaker,” an intricate, classical guitar suite set to minimalist electronics, as the exact moment Baroness died to them.

Look, it’s neither easy nor comforting, to turn your back on history and forget everything you once knew as truth, like “Baroness are metal,” for example. The human brain, in fact, is wired to avoid such confrontations. Some will have a real choice to make: Is it better to trudge through the sludge of Baroness’ earlier work and relive the days when my favorite band still sounded like my favorite band, or to take on the more challenging, rule-breaking expansion of Yellow & Green, even if it isn’t inherently metal, and doesn’t deliver the same sort of thrills?  For the rest of us, however, there’s a stereo and a stage ready to rock, because few, if any, have done it better in 2012 than Baroness.  10 out of 10 on The Rockometer.