Warning: "continue" targeting switch is equivalent to "break". Did you mean to use "continue 2"? in /nfs/c06/h01/mnt/88637/domains/blog.irockcleveland.com/html/wp-includes/pomo/plural-forms.php on line 210
 I Rock Cleveland I Rock Cleveland | The Rockometer: Advaitic Songs by Om

The Rockometer: Advaitic Songs by Om 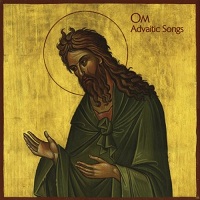 Advaitic Songs is the second album by Om since Emil Amos replaced original drummer, Chris Haikus, and yet, the duo of Amos and Al Cisneros (bass/vocals) still sound like a band in transition. They lack both the thunderous simplicity and crushing rhythms of the original lineup and the expansive, cinematic qualities of Amos’ other full time band, Grails. To the question of maxed out or minimalist, the answer tends to be maybe. And to the question of meditative metal or just plain meditative, the answer is again, maybe.

Unsurprisingly, the strongest of Advaitic Songs’ five tracks is “State of Non-Return,” the one where Cisneros, the former Sleep bassist, plays at full volume and full blown distortion for the bulk of the track while Amos’ love of exotic, Eastern instruments occupies the introduction, the transitions, and the ending. The rock out and zone out forces are in perfect balance.

Otherwise, the rest of Advaitic Songs is a case of too much and not enough. The female vocals on album opener, “Addis,” and the distinct lack of thump from Cisneros bring the band perilously close to new age. While the three-minute introduction on “Sinai,” with its droning keys and chant cloaked in radio static, similarly stretches the listener’s patience. By the end “Haaq al-Yaquin,” the album’s eleven-minute closer, the tabla becomes too much to take. Metal is but a distant memory. Instead, we’re inhabiting a space with hippie George Harrison, a place out of date for 2012, and a place Amos and Cisneros need to leave, quick.  6 out of 10 on The Rockometer.