Warning: "continue" targeting switch is equivalent to "break". Did you mean to use "continue 2"? in /nfs/c06/h01/mnt/88637/domains/blog.irockcleveland.com/html/wp-includes/pomo/plural-forms.php on line 210
 I Rock Cleveland I Rock Cleveland | The Rockometer: The Plot Against Common Sense by Future of the Left

The Rockometer: The Plot Against Common Sense by Future of the Left 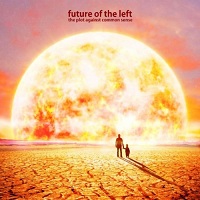 Ian Cohen’s Pitchfork review of The Plot of Common Sense was rightfully hatcheted by Future of the Left’s Andrew Falkous for missinterpreting lyrics on multiple songs and overestimating the studio budget by, let’s say a factor of 100. Look, no musician likes a bad review, especially one on such an influential website. And the fact that Cohen was off on many of his key points, meant this particular bad review could serve no constructive purpose. It’s not like Falkous can go back to his writing room and say, “Fuck, he’s got a point. No more songs about Alcoholics Anonymous,” when he never did pen an indictment of AA. Neither, can he take the band to the garage for a more “authentic” sound when he and the bandmates could barely scrape together enough money for the modest studio time needed to record this album.

Yet, even if the supports of Cohen’s arguments fail upon inspection, he did come to the correct conclusion. Something is amiss here with the Plot Against Common Sense.  This is not Andrew Falkous’ best work, not with Future of the Left, and not with his previous band Mclusky, and that something can be found both in the lyrics and in the production.

Where once Falkous would pen the most colorful take downs of dimwitted and wayward locals, he, himself has become a neighborhood character — The one who screams , “Damn you kids, get off of my lawn!”

Sheena of “Sheena is a t-shirt salesman,” wears t-shirts of bands she hasn’t heard. Great, but the character isn’t developed beyond her choice of clothes. We all could identify with the braggart in Mclusky’s “To Hell With Good Intentions,” and his dad with four boats and a house in Ireland. Sheena is just a stupid girl.  Similarly, the protagonist of “Sorry Dad I Was Late for the Riots,” is well to-do, and has tedious reasons for being late to televised protests, like a headache and a bad back.  He’s stupid, too.  I suppose.  Compared to other Falkous characters like Alan, the Cowboy Killer, Garreth Brown, Ferguson, or Mark Foley, however, he’s just a skeleton of a man.

Who knows?  Maybe my negative review will get a letter from Falkous, too.  Really, like Cohen, I’m searching for the reason why a man with such a high hit to shit ratio throughout his recording career has fallen flat, and if I have to be on the receiving end of a profane screed to get to the truth, so be it.  5 out of 10 on The Rockometer.