Warning: "continue" targeting switch is equivalent to "break". Did you mean to use "continue 2"? in /nfs/c06/h01/mnt/88637/domains/blog.irockcleveland.com/html/wp-includes/pomo/plural-forms.php on line 210
 I Rock Cleveland I Rock Cleveland | The Rockometer: Researching the Blues by Redd Kross

The Rockometer: Researching the Blues by Redd Kross 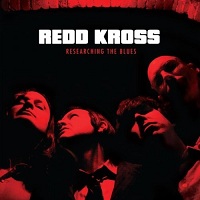 Kiddie punks, pop-culture junkies, pranksters, producers, pop music savants, friends of and collaborators with Danny Bonaduce (I shit you not) and hardcore revivalists, Jeff and Steve McDonald of Redd Kross have been all that and more during a 31-year career which began opening for Black Flag at an 8th grade graduation party in 1981. With Researching the Blues, the band’s seventh album, the first since 1997’s Show World, and more importantly, perhaps their strongest effort to date, it’s time to give the Brothers McDonald another title — Rock ‘N’ Roll Survivors.  For like Steve McDonald’s recent work with Keith Morris’ veteran hardcore group, OFF!, this album features a quartet who play with an energy indifferent to age, but with the type smarts and talent gained only through experience.

Clearly, a band like Redd Kross doesn’t return to the studio after a decade-long absence for pay days or choice spots on festival stages.  The band’s favored genre, power pop, wasn’t a quick way to fame in 1997 and is even less of one today, as critics are far more likely to extoll the virtues of K-Pop or dubstep than admit there’s still charm to be found in the basic formula of guitar, voice, melody, and repeat.

Rather, a band like Redd Kross returns for the sheer enjoyment of making music.  It’s a fact evident in the title track, “Researching the Blues,” when its grunge-pop underpinnings of a firm bass line and stuttering guitar riffs right themselves for a rambunctious chorus, and even more so with “Stay Away from Downtown,” as Jeff McDonald’s feverish vocals are seemingly placed one beat ahead of the bar rock blasted by the rest of the band in a sly game of catch me if you can, only to align perfectly during its ecstatic burst of a refrain.

Later, the paisley underground, sunshine pop of “Dracula’s Daughter,” and the sharp harmonies of the positively Beatles-like, one-two of “Meet Frankenstein” and “One of the Good Ones,” offer further proof of the McDonald’s perfected craft.  While the infectious and jangly duo “Choose to Play” and “Winter Blues,” on the latter half of the album, both seem tailor made to lead off the soundtrack of a quirky, ’90s romantic comedy.  They’re just as enjoyable if you happen to be living in the year 2012.

Even if album closer “Hazel Eyes,” is a bit of a goof off and a toss off, it’s still impressive to think of the long journey Redd Kross took from young punks in the early ’80s, to influential and virtually unheard of icons in the late ’80s, from a band whose brief moment of alterna-pop fame in the ’90s came packaged with a style salvaged from the set of the Brady Bunch, to a band who knows better and does it better, too.  9 out of 10 on The Rockometer.