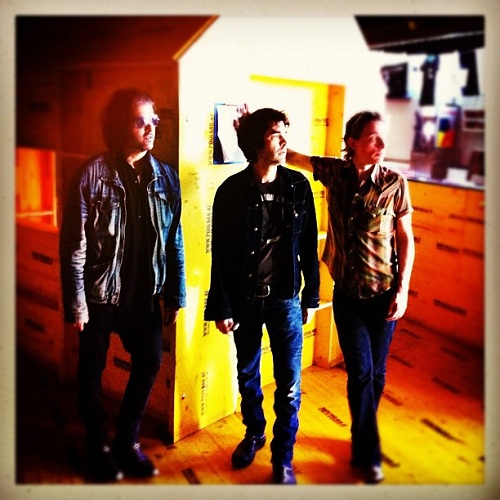 I wouldn’t say I forgot about the Jon Spencer Blues Explosion. Hell, it wasn’t that long ago that I was raving about their performance at the 2010 Pitchfork Music Festival, when Spencer, Russell Simmins, and Judah Bauer put all the young ‘uns to shame in the sweltering heat. Instead, let’s say the Blues Explosion temporarily slid off my radar during the summer of 2012.  This, in spite of the fact they have a new record coming out later this year, due 9/18 on Mom + Pop Records, to be exact.

A new 7″ single sitting at the store counter can do wonders for a man’s memory. And when that 7″ single happens to be a double-A side with “Black Mold” and “Bag of Bones,” both by the mighty Blues Explosion, it does a lot more than jog memory, it shakes the back side, too.

“Black Mold,” in particular, is a blast from Spencer’s past.  It’s a relatively linear, blues and boogie jam with an amped up tempo, a lead riff which will leave some thinking “Turning Japanese” and Spencer’s vocals filtered as if he’s calling them in through a land line.  But make no mistake about it, there’s nothing called in, mailed in, or otherwise slack about this number. These boys, ahem, men, can still rock like none other.  And one day, instead of Jon Spencer name checking his heroes, as he does during the track’s break down, it’ll be some new, young cat giving a nod his way.  At least, that’s how it should go.