Warning: "continue" targeting switch is equivalent to "break". Did you mean to use "continue 2"? in /nfs/c06/h01/mnt/88637/domains/blog.irockcleveland.com/html/wp-includes/pomo/plural-forms.php on line 210
 I Rock Cleveland I Rock Cleveland | The Rockometer: Silver Age by Bob Mould 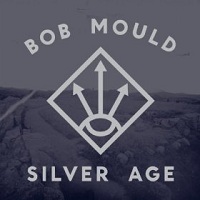 Inspired by the recording sessions which produced both the 1992 album Copper Blue and the 1993 EP, Beaster for his post-Husker Du band, Sugar, Bob Mould’s Silver Age is an aggressive, no-frills guitar pop album quite unlike anything the indie-rock lifer has produced in years. Sure, it’s the proverbial bone thrown to the dogs who have been howling for another rock record from Mould. And, even at its best, Silver Age doesn’t measure up to the best from Sugar (see “JC Auto,” “Helpless,” and “If I Can’t Change Your Mind“), or even the much overlooked 1990 Mould album, Black Sheets of Rain (seriously, go back and check the title track, it’s some of his best guitar work ever put to tape, including Husker Du).  Still, for those howlers, and I’m certainly one of them, Silver Age should satisfy.  Lead single, “The Descent,” effectively uses the same pairing of gloom and doom lyrics and urgent, upbeat melodies spiked with screech and squawk that worked so well with Sugar.  “Star Machine,” meanwhile colors itself with the classic ’90s palate of soft/loud, stop/start pioneered by the Pixies and copied first by Mould on Copper Blue’s “A Good Idea.”  To make the 90’s flashback complete, there’s even a love like heroin like Rock ‘N’ Roll reference on the second side’s highlight track, “Keep Believing.”  Although, beginners to the extensive work of Bob Mould will still want to start with the Husker Du albums Zen Arcade, Flip Your Wig, and New Day Rising and follow with Sugar’s Copper Blue and Beaster, and those in the intermediate class, would do best to revisit Black Sheets of Rain, Silver Age proves the man whose career has zig-zagged between pro wrestling writer to dance music producer and dj in recent years can still deliver a healthy punch of punk-inspired rock when the mood hits him.  That’s good enough for me. 7 out of 10 on The Rockometer.