Warning: "continue" targeting switch is equivalent to "break". Did you mean to use "continue 2"? in /nfs/c06/h01/mnt/88637/domains/blog.irockcleveland.com/html/wp-includes/pomo/plural-forms.php on line 210
 I Rock Cleveland I Rock Cleveland | The Rockometer: I Bet On Sky by Dinosaur, Jr

The Rockometer: I Bet On Sky by Dinosaur, Jr 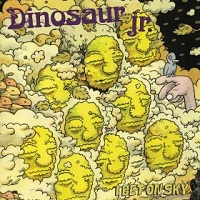 My 1996 self has a hard time believing that in the year 2012 the original lineup of Dinosaur, Jr is still releasing relevant music. 1996 self points out that 1994’s Dinosaur, Jr album, Without a Sound was basically J Mascis in control-freak mode and was one single (“I Feel the Pain”) and filler. 1996 self gave up on Dinosaur, Jr after that album. Of course, 1996 self would rather see the Jon Spencer Blues Explosion implode, talked of the death of Sublime’s Bradley Nowell in ways others spoke of Cobain, and was convinced Weezer would go on releasing enjoyable, adorkable albums for years to come. 1996 self wasn’t always right, but on the subject of Dinosaur, Jr few would have disagreed with his assessment that Mascis had already ran his lifetime supply of creativity dry and was now best suited to be a sideman or a guest guitar-slinger on one-off projects.

Fuck, am I glad 1996 self is buried in history with his Sublime CDs.  With I Bet on Sky, the original lineup of Dinosaur, Jr — J Mascis on guitar, Lou Barlow on bass, and Murph on drums — has now released their third comeback album and more importantly, continue to make a mockery of reunion rock.  This isn’t about having something to play between the hits and moving a handful of units to supplement t-shirt sales at the Rock ‘N’ Rib Cook-Off.  No, Mascis and band are refining Dinosaur, Jr.  The massive guitar wail, borrowed and blown up from classic rockers like Neil Young, right in tune with the ’90s grunge explosion, exemplified by a stoic Mascis standing in front of giant stacks of Marshall amps, is still present, but no longer the sole focus.  It’s often relegated to intros, outtros and the bridge.  Mascis’ voice is smoother, cleaner, too, and no longer an impediment to enjoyment when the amps aren’t at 11.

“Almost Fare” pairs blurred acoustic chords deep in the mix with sharper, more jagged, electric guitar in a tempo one step ahead of dad rock.  Even the solo, while still stinging, shows restraint.  Later, teary-eyed, bar ballads like “Stick a Toe In,” share space with the Barlow-led back-porch, foot-stomper “Rude.”  The trio get the wah-wah out on the almost funky, “I Know It Oh So Well,” and showcase some of their old drive on “Pierce the Morning Rain” and “What Was That.”

Granted, Dinosaur, Jr as the elder statesman of indie rock may take some getting used to. New, next, and now will always be the sexier role to play in rock music. Yet, even 1996 self would have a hard time denying Dinosaur, Jr’s second act. They tease enough of the back catalog to get the new fans digging the past and change things up just enough to get the vets looking forward to the next album and the next tour.  At this point, there’s little doubt Dinosaur, Jr have even more in store.  8 out of 10 on The Rockometer.