Warning: "continue" targeting switch is equivalent to "break". Did you mean to use "continue 2"? in /nfs/c06/h01/mnt/88637/domains/blog.irockcleveland.com/html/wp-includes/pomo/plural-forms.php on line 210
 I Rock Cleveland I Rock Cleveland | The Rockometer: Putrifiers II by Thee Oh Sees 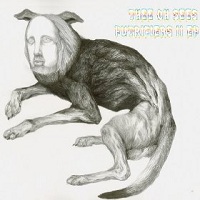 Eschewing his recent trend of keeping the pop songs on one album (2011’s Castlemania) and the rock songs on another (2011’s Carrion Crawler/The Dream), the prolific John Dwyer seeks to combine both wonderfully weird strains of his band’s psychedelia into one concise record with Thee Oh Sees’ 10-song EP, Putrifiers II.  And it should work fantastically.  Distilling two albums into one should cut the clutter and make for one wild ride, or so the theory goes.  Opening number, “Wax Face,” certainly gives a startling first impression, as it channels twee pop through the big-boot stomp of boogie rock. The title track provides a similar juxtaposition with the globbing, bubbly hues of a lava lamp now providing cover.  Later, the kraut influences, so prevalent on Carrion Crawler/The Dream, make a return appearance on the throbbing, skronky “Lupine Dominus.”  Yet, not everything on Putrifiers II follows the same, take two albums of material and make one killer EP, plan. “So Nice,” is but a standard re-imagination of the Velvet Underground’s “Venus in Furs,” shockingly so for someone so wonderfully weird, and the warped, 1950s prom-rock of “Will We Be Scared,” is an absolute momentum sucker at nearly five-and-a-half minutes.  By the time we get to “Goodnight Baby,” and “Wicked Park,” the two lighter, ’60s inspired pop songs which close out the album, the band sound totally tuckered out, something that should not happen to a band blessed with an abundance of energy.  Maybe it’s time for a new plan, the re-charge, re-focus, and come out swinging plan.  6 out of 10 on The Rockometer.