The Rockometer: Circles by Moon Duo 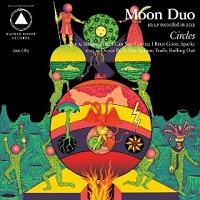 Even the most ardent supporters of Moon Duo, and guitarist Ripley Johnson’s other band, Wooden Shjips, for that matter, have to admit the songs all start to sound the same after a while. Granted, that’s the point. Johnson’s compositions, steeped in the San Francisco psychedelic tradition, rely heavily on repetition of guitar and bass, of drums and keys, with slight variations becoming amplified as they’re worked within this larger, strictly applied method. It’s a good trick, but it’s also gotten to the point that guitar solos, no matter how gnarly, videos, no matter who’s the guest star, no matter how much spandex is worn, can’t distract the listener from the fact Johnson had to find some new grooves.

Circles, the second Moon Duo album, is a small step in the right direction. Even without performing an intense quantitative analysis, one can sense the presence of more notes. If I had to guess, I’d put it at a 20-25% increase. With this level of note variety, Johnson and Sanae Yamada are able to adhere to their methods without falling into the complexity trap of a band like Animal Collective, who’ve recently become convinced the more shit you can stuff into a song the better (hint: that’s not the case). Dig a little deeper, and tracks like “Circles,” and “Trails,” almost, kinda, sorta, sound like pop songs (and Johhnson’s voice almost, kinda, sorta sounds like Bono’s, but I don’t wanna go there). It isn’t a big leap forward, grooves still get locked, busy minds will be lulled to comfort, and I can’t promise you’ll come away from Circles with the same impression, but it is enough for this jaded rocker to keep following both Moon Duo and Wooden Shjips through to the next release cycle. 7 out of 10 on The Rockometer.