Warning: "continue" targeting switch is equivalent to "break". Did you mean to use "continue 2"? in /nfs/c06/h01/mnt/88637/domains/blog.irockcleveland.com/html/wp-includes/pomo/plural-forms.php on line 210
 I Rock Cleveland I Rock Cleveland | The Rockometer: S/T by Metz

The Rockometer: S/T by Metz 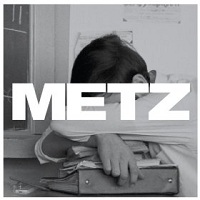 Metz have the right references. Listen closely to their self-titled debut and you’ll hear reminders of Mudhoney, The Jesus Lizard, Fugazi, and even Nirvana’s Bleach. Metz have the right home in Sub Pop Records, and one of those references, Mark Arm of Mudhoney, works at Sub Pop and is on record stating his personal fondness for the band. Metz have this kick-ass, machine-shop guitar sound. It’s as if they spent take your musician friend to work day auditioning various pieces of heavy machinery until they found the perfect grind. In fact, everything about Metz seems right. They even have a wild live show, if all of the internet reports are to be believed.

Still, as promising and as perfectly formed as this Canadian trio is, something is definitely missing from this record. That something is a signature song. The ten tracks collected here swagger, pulse and pummel and then fly by with surprising anonymity. Which number whips the punks into a frenzy of flailing arms? Which number causes the vets to lose their shit and their beers when their fists spontaneously clench and punch the air? It can’t be all of them, every one where there is screech and the drummer beats the drums like they fucked over the drummer’s mother, and more screech, enough to peel the last remnants of paint off of a DIY loft space, then bass to bludgeon and seethe, seethe, and a scream to forget.

Granted, there are little variations, like a ghostly sample or two deep inside the mix. You’ll hear tweaks to the screech machines and one song will have a little extra feedback at the end and another may use feedback as an intro. Once Metz give the listener something more than promise, positive press, and reminders of killer shows of yore, they will be unstoppable. Instead, for now, they’re just another band on the verge. Or, to put it another way, in the one sentence summary way: If a band has a killer sound, but all the songs sound the same, is it still a killer sound? The answer is not yet. 6 out of 10 on the Rockometer.