Warning: "continue" targeting switch is equivalent to "break". Did you mean to use "continue 2"? in /nfs/c06/h01/mnt/88637/domains/blog.irockcleveland.com/html/wp-includes/pomo/plural-forms.php on line 210
 I Rock Cleveland I Rock Cleveland | The Rockometer: The Bears for Lunch by Guided by Voices

The Rockometer: The Bears for Lunch by Guided by Voices 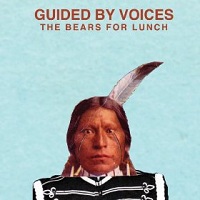 Guided by Voices
The Bears for Lunch
GBV Records

In retrospect, it shouldn’t have been a big surprise that this, the reunited, classic era, Guided by Voices lineup would have chosen to record a new album nearly 15 years after their first go-round together had ended. Had you been there, too, at any of those first shows during the fall of 2010, the evidence was abundant — Robert Pollard and his rock kicks, guitarist Mitch Mitchell and his windmills, bassist Greg Demos with flashy pants and a giant grin, Tobin Sprout and Kevin Fennell, also gracious and energized, the jam packed crowds slurring their words with Pollard — everyone involved was having a damn good time.

And, really, the fact that Guided by Voices have now released three albums in 2012 (Let’s Go Eat the Factory, Class Clown Spots a UFO, and The Bears For Lunch), shouldn’t shock, either. We are talking about a man in Pollard, who, and we’re being conservative here, has written over a thousand songs in his lifetime.

What is surprising, is how easy Guided by Voices have made all of this seem. Listen to their new material and it’s like the years between 1996’s Under the Bushes, Under the Stars, and 2012’s first album, Let’s Go Eat the Factory, didn’t happen at all. No iPods and no iPads. No Pets.com and no Facebook. No George W. Bush, no 9/11, and no wars in Afghanistan and Iraq.  No African-American in the White House and no Tea Party. No rap-rock, no post-grunge grunt rock, no garage rock explosion of the “The” bands, and indie rock has always rocked.

Pollard’s sense of pop still jumps between skewed and obtuse and uniquely endearing. Similarly, Sprout’s contributions still tend to be more immediate, able to refocus the outfit whenever Pollard ventures too far into weirdsville. As a tandem, they’ve been able to craft enough fan favorites in “The Unsinkable Fats Domino,” “Keep It in Motion,” “All of This Will Go,” and “John the Croc,” to make recent treks across America not only an extended victory lap, elbowing out the ever-crowded ’90s rock band reunion circuit in the process, but also a celebration of a living, thriving band.

“King Arthur the Red,” kicks things off in dramatic style, part guitar muscle and part performance art, like a selection from one of The Who’s rock operas. While Pollard, himself, has professed a special fondness for “Hangover Child,” labeling this blithe melody which rises from a cascading rubble of guitar as one of his favorites of all time during recent performances.  Likewise, Sprout’s “Waving at Airplanes,” with its warm acoustic glow and subdued buzz concealing otherwise somber tones, stands as one of his finer contributions to Guided by Voices, as well. Well, that’s until we get to “Waking up the Stars,” where Sprout cocoons himself inside a song of sweetly picked guitar and steady violin, recalling the poignancy of the singer-songwriter Elliott Smith without fully turning himself over to the despondence and dread of dried blood, empty bottles, and mocking parades.

So, yes, The Bears for Lunch is another collage rock album which hits all four P’s in the Robert Pollard guidebook to successful songwriting — Pop, psych, punk, and prog; An album amazing in both consistency and quality as it cuts between styles without warning, alternately touching in its sincerity and energetic beyond the band member’s years. Oh, and it happens to be the best Guided by Voices album since the last Guided by Voices album, and in all likelihood, until the next one, too.  I wouldn’t be surprised. 8 out of 10 on The Rockometer.