Warning: "continue" targeting switch is equivalent to "break". Did you mean to use "continue 2"? in /nfs/c06/h01/mnt/88637/domains/blog.irockcleveland.com/html/wp-includes/pomo/plural-forms.php on line 210
 I Rock Cleveland I Rock Cleveland | For a Filthy Good Time: Iggy Pop and Zig Zags and Betty Davis and Zig Zags 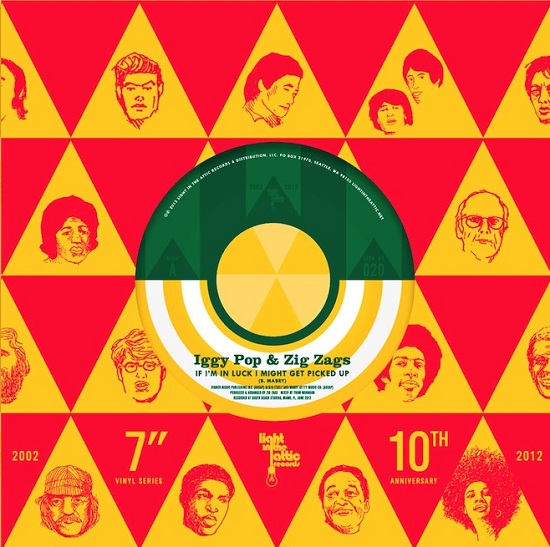 Small Business Saturday, the independent retailers’ plea for attention after Black Friday, fell on the same day as Bill hits the record stores Saturday this year, as it does pretty much every year. There were still some special Black Friday releases left over at My Mind’s Eye Records in Lakewood, my second stop of the day, but those weren’t the ones that caught my attention. Over at the 7″ section, I scoped out and then picked up three of Light in the Attic’s 10th Anniversary singles: Iggy Pop and the Zig Zags covering Betty Davis’ “If I’m In Luck I Might Get Picked Up” B/W the original version, Mark Lanegan covering Karen Dalton’s “Same Old Man” B/W the original, and Sweet Tea (featuring members of The Black Angels and Heartless Bastards) covering Wendy Rene’s “After Laughter (Comes Tears)” B/W the original.

The Mark Lanegan single is a Mark Lanegan single. I’m on record saying I’d buy anything sung by Lanegan, in his broken- down, ash-covered voice, even a cover of “Zip-A-Dee-Doo-Dah,” if such a horrible thing ever came to be. Similarly, the Sweet Tea single is pretty much what you’d expect to get when Erika Wennerstrom, the lead singer of Heartless Bastards, and her big, crackling, not always in tune, but always emotionally powerful voice is moved to a psychedelic pop setting.  But this Iggy Pop single, damn, this is really something.

Here, Pop is paired with a virtually unknown band of metal-loving, LA punks, the Zig Zags, and they transform Betty Davis’ tale of a young, strong black woman looking for a hook-up into absolute filth. Think about it. Or, maybe you don’t want to think about Pop roaming the streets looking for tail. Then, think, or don’t, of a monster heap of guitar sludge accompanying a sickly thin, old man with a ragged face and insincere grin checkin’ out the younger ladies as they walk out of the club. Whoa filth.

True, Pop had ace source material to work with. Check the stirring funk and punk of Davis’ original.

And while unknowns, these Zig Zag cats do not shy away from sludge and trash. In fact, they revel in the rubble.

Still, even with the source material and the right backing band and the relatively low bar set by some his recent work, it’s not too much to say this is the most vital recording Iggy Pop has done in quite some time. This is essential Iggy Pop.

As a bonus, I’ve compiled a playlist of Light in the Attic’s 10th Anniversary singles available to date. Not all of them have been released as physical singles yet, but they available digitally for streaming, and the singles discussed above can also be purchased at Amazon, iTunes, and the like.