Warning: "continue" targeting switch is equivalent to "break". Did you mean to use "continue 2"? in /nfs/c06/h01/mnt/88637/domains/blog.irockcleveland.com/html/wp-includes/pomo/plural-forms.php on line 210
 I Rock Cleveland I Rock Cleveland | The Rockometer: We Are the Ambassadors of 21st Century Peace and Magic by Foxygen

The Rockometer: We Are the Ambassadors of 21st Century Peace and Magic by Foxygen

3
The Rockometer Says... "This is Bullocks" 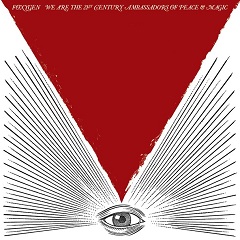 When I talk about American indie rock having an aversion to reality, and I have to praise the Australian underground for taking the rare approach of living and singing in the same world, I’m talking about Foxygen.

You know the types. Foxygen say they love Jesus and Zombies, but they’re also the ones holding court at the local hipster bar, admired by one half of the crowd for their nowness and loathed in equal measure by the other half for their outward cluelessness to anything that matters.

When I talk about the roots of music being lost as the soft rock sounds of dentist offices gone by have become groundbreaking music for newer generations, I’m also talking Foxygen. Their attempt at street gospel or Broadway funk or Neil Diamond or whatever the dual mess of “Shuggie” and “Oh Yeah” are intended to be would be album killers, if their soft psychedelic sounds on “In the Darkness,” and “No Destruction,” hadn’t already hardened me to the fact that in the world of Foxygen, everything is all right.

The blues of “Blue Mountain,” and we’re using the term lightly, because the boys of Foxygen only do emotion when the style calls for them to show emotion, suffers from a similar lack of authenticity. I have a hard time believing this duo would make it out alive of a real blues bar if they tried this same kind of half-hearted howl on a hardened and knowledgeable crowd. Pitchfork readers are not a hardened and knowledgeable crowd. They’ll give a pass when something kinda resembling the blues begins with the lines, “I was looking through the Bible/ I was looking at a goat/If you try you can’t remember/ That what you see is just what you know.” Men don’t.

At least on the Shins’ early work, who Foxygen do resemble at times, (when they aren’t hacking up musical styles they have no business being around, and do The Kinks via The Shins or The Beatles via The Shins), they could simultaneously charm and break your heart with tales of youthful alienation. Foxygen just do bland and bands learned from Youtube videos.