Warning: "continue" targeting switch is equivalent to "break". Did you mean to use "continue 2"? in /nfs/c06/h01/mnt/88637/domains/blog.irockcleveland.com/html/wp-includes/pomo/plural-forms.php on line 210
 I Rock Cleveland I Rock Cleveland | Top Jam: “Pendulum Swing” by Blank Realm 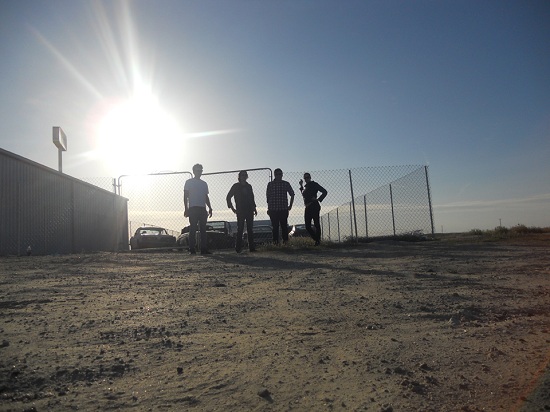 Like others in Australia’s underground rock scene, the Brisbane quartet, Blank Realm, take influences familiar to American audiences, but reassemble them in such a way they end up sounding fresh. At different points during my time with their latest release, Go Easy, I was reminded of Devo’s offbeat melodies, The Slits polyrhythmic punk, or the early New York noise of Sonic Youth. Not once, however, did Blank Realm sound exactly like any one of those acts.

“Pendulum Swing,” my personal top jam from Go Easy, should illustrate my point as well as any cut. Notice how Blank Realm take an electronic musician’s approach to assembling this particular punk rock anthem. The rhythm tracks and the main guitar melody are both loop-based and stay constant throughout much of the number’s nearly nine minutes.  Along the way, other layers are added to augment their accented howl. There are vintage synths staged to sound like 60’s Star Trek tech and every so often, a raging swarm of feedback emerges, leveling everything else in its path. Then, once that racket ebbs, we’re back to our basic rhythm and guitar tracks, again. Simply put, “Pendulum Swing,” is brilliant. More bluntly stated, it’ll knock you onto your arse. Australians say arse, too, right? Blank Realm’s Go Easy was originally released by Siltbreeze and Bedroom Suck near the tail end of 2012. It is being re-released by Fire Records, March in the UK, and May, here in the States.

Want to hear more? “Cleaning Up My Mess” is also streaming at SoundCloud.