Warning: "continue" targeting switch is equivalent to "break". Did you mean to use "continue 2"? in /nfs/c06/h01/mnt/88637/domains/blog.irockcleveland.com/html/wp-includes/pomo/plural-forms.php on line 210
 I Rock Cleveland I Rock Cleveland | Live Rock Action: The Many Sides of Yo La Tengo

Live Rock Action: The Many Sides of Yo La Tengo 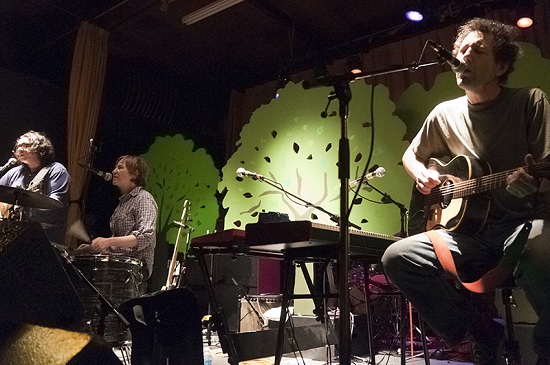 Words often fail when attempting to describe the lasting appeal of Yo La Tengo. To say this long-running, Hoboken trio is a critic’s band implies they’re difficult for the average music fan to understand. It wasn’t just critics, record store owners and vinyl geeks who filled the sold-out Beachland Ballroom on Thursday night. There were normal folk, too.

To describe their talent as a band who can play any song in any style, Black Sabbath’s “Ironman” like a bossa nova band, for example, can elicit replies like, “So, they’re a cover band.” While Yo La Tengo never shy from the cover song, they have over twelve albums of original material to pull from, containing rockers and ballads, guitar-based indie rock and lounge music, country and western and electronic pop, and they tend to use every bit of their discography on tour. This night was no exception.

Always unassuming, Ira Kaplan, Georgia Hubley, James McNew, quietly walked on to the stage and sat themselves in front of three large trees of the high-school drama club prop variety, and began their first of two sets with an unplugged version of “Ohm,” the first track from their 2013 album, Fade. There were no electronic pops and clicks from the album version, just Kaplan and McNew, dressed like common people in solid-colored shirts, on acoustic guitar. Hubley didn’t touch her drums until the second verse. A similar treatment was given to older numbers like “Double Dare” and “Big Day Coming” from the 1993 album Painful.

At this point in their career, Yo La Tengo aren’t particularly concerned with expectations. They have an adoring and trusting fan base who are willing to follow wherever the night’s performance may lead. Consequently, hardly a peep was heard from the crowd during the 45 minute acoustic set. One could even hear the hum of the Beachland’s heating system. Each number, including new songs “I’ll Be Around,” and “Is That Enough,” was given warm, if not exceedingly polite, applause. It was a friendly, living room atmosphere, with Kaplan interjecting, self-deprecating asides between songs, at one point apologizing for not shaving before the show, because we all know how important proper grooming is to the Rock ‘N’ Roll experience. 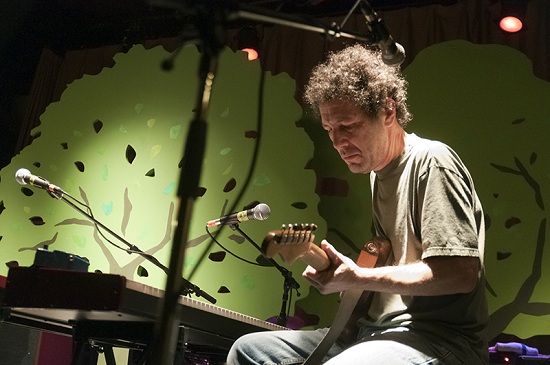 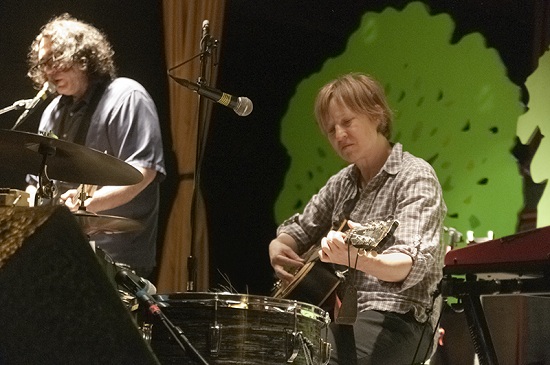 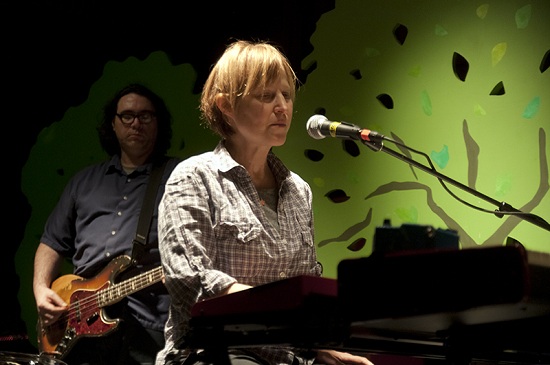 After a forty-five minute break, where the trees were pushed to the rear of the stage, uncovering the stacks of amps hidden during their unplugged, opening set, Hubley, Kaplan, and McNew took the stage much the same way the night began. They smiled, took their spots, and began to jam. First, up was “Stupid Things,” done more in the style of the single version released late in 2012, with all of those throbbing electronics firmly in place.

They would dive deep in the discography for “The Story of Jazz” and “Let’s Save Tony Orlando’s House,” and give fresh interpretations of even their newest songs. This time when they played, “Ohm,” it became a noise rock dream. Kaplan, looking like he was in the middle of an epileptic fit, threw his body into every gnarled note. Fan favorites, like the slight, uplifting pop of “Beanbag Chair,” and the jangly, mid-tempo bobber, “Tom Courtenay,” made appearances, too.

At this point, the crowd were no longer sedate. The calm of the opening set had long passed. Now, one could see men thrashing and dancing in place and the women doing their more polite version. Similarly, the audience response grew. By the time Kaplan was done ravaging his guitar and his gear on set closer, “Pass the Hatchet, I’m Goodkind,” frenzied howls and screeching whoos replaced those classical, concert claps.

Just like the band they adore, Yo La Tengo fans are both knowledgeable and adaptable. They show respect when appropriate and still are capable of losing their shit. An encore which included two members of Columbus, Ohio’s Times New Viking joining the trio for a cover of the Cramps’ “Drug Train,” left everyone shitless, for sure.

Even more, the encore answered our original question: How has Yo La Tengo maintained their appeal for so long? It’s all in the show. Instead of trying to describe Yo La Tengo, invite the doubters out, and let them witness for themselves a wild varying performance where quiet, contemplative moments and guitars like animals unleashed, mingle freely; Let them feel the energy in person and they will understand how there’s no other band quite like Yo La Tengo. 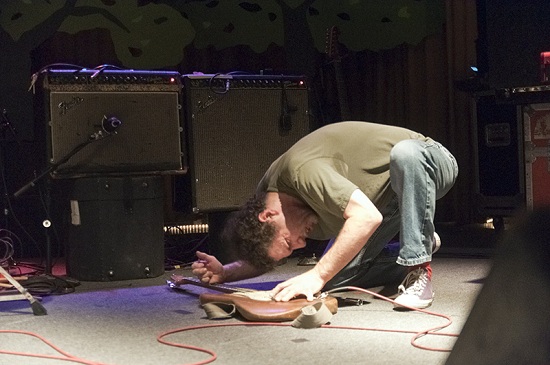 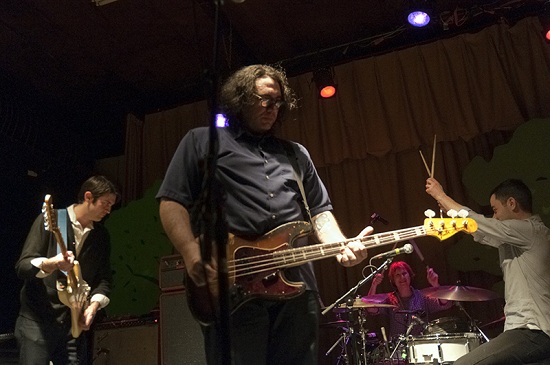