Warning: "continue" targeting switch is equivalent to "break". Did you mean to use "continue 2"? in /nfs/c06/h01/mnt/88637/domains/blog.irockcleveland.com/html/wp-includes/pomo/plural-forms.php on line 210
 I Rock Cleveland I Rock Cleveland | The Rockometer: Double Natural by Boomgates 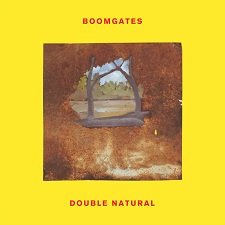 Supergroup may not seem like the best way to describe the Melbourne musicians who gathered to record under the name Boomgates. Brendan Huntley (Brenadan Suppression of Eddy Current Suppression Ring) and Steph Hughes (Dick Diver), two of the band’s better known personalities from the Melbourne garage-rock scene, hardly register here in America. Furthermore, they never intended for it to be any more than a part-time jam session amongst friends.Yet, after spending time with their debut album, Double Natural, it’s difficult to ignore both the assembled talent at hand and the ease at which the songs just flow.

The pointed precision and contrasting clang of the guitars on opening track, “Flood Plains,” should sound familiar to anyone who’s followed Eddy Current Suppression Ring through their first three albums of punk, post-punk and garage rock. Huntley, however, is in a much different place. With the Eddy Current Suppression Ring he’s always been a sputtering fit of anxiety, wound too tight with emotion and burdened with too many words and not enough time. Here, he’s relaxed and comfortable enough with his reliably off key vocals to operate at an even pace.

Like Huntley, Hughes’ vocals have a commoner’s tone. Neither will be winning The Voice, X Factor, America’s Got Talent, American Idol, or any Australian equivalent. Together, when they duet on numbers like “Cows Come Home” and “Cartons and Cans,” both classic, country-folk numbers tailored for friends with beers and instruments, they exceed both limitations and expectations. They’re like Mark Lanegan and Isobel Campbell, but without the weight carried by their previous work and without a care whether anyone would ever hear their output. Unintentional, as they case may be, their close-enough harmonies communicate more to the bonds of happiness than any slickly, produced piece of pop ever could.

This free-wheeling nature of Double Happiness later extends to “Whispering or Singing.” It’s frantically strummed, uncannily picked, country punk with a rumble of a rhythm section meant to mimic a freight train careening down the tracks. The fact that the two guitarists can’t seem to settle on one tempo only adds to its inherent charm of Huntley and Hughes taking on the roles of separated lovers. It also happens to be one of the strongest melodies Huntley has ever had on tape.

Ultimately, whether Boomgates is considered a supergroup or a band of musicians with free time and extra beers isn’t an important distinction. As the album’s closing track, “Any Excuse,” serves as both a farewell for those familiar with names like Eddy Current Suppression Ring, Dick Diver and The Twerps, and an introduction for those just discovering the deep Melbourne scene. Any excuse these musicians make for a jam session, is reason enough for you to tune in.